After nearly 70 years operating out of a historic elementary school that dates back to 1910, the City of Boerne, Texas, will get its first-ever City Hall later this year. Designed by Randall Scott Architects, the three-story, 45,300-square-foot city hall will house up to 70 city employees in 10 departments and serve as a one-stop service center for Boerne residents. The $22 million facility represents a major milestone for the rapidly growing community located 45 miles northwest of San Antonio. 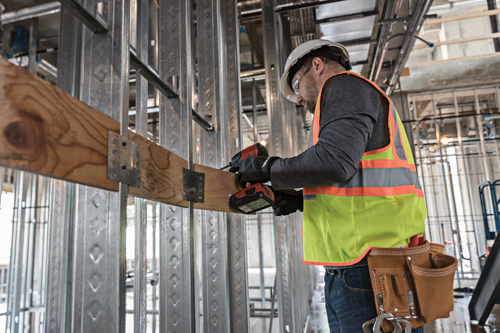 From the outset, the project team was dedicated to designing a city hall that would serve the city for years to come. To help achieve that goal, the architect consulted closely with general contractor Lee Lewis Construction and installer Millard Drywall & Acoustical Construction to specify a number of ClarkDietrich products for the building’s interior and exterior framing. In total, the project team installed roughly 250,000 pounds of ClarkDietrich cold-formed steel on the project, including the ProSTUD® Drywall Framing System, MaxTrak® Slotted Deflection Track, and Danback® Flexible Wood Backing System. The team also leveraged the Clip ExpressSM Service for fast and economical steel framing connection solutions.

Because they are easy to install and provide streamlined solutions to many design challenges, ClarkDietrich’s innovative framing products helped the project team to keep the project on schedule and on budget. For example, Sierra stated that the Millard crew was able to cut installation time of headers by using ClarkDietrich’s RedHeader Pro™ Rough Opening System rather than constructing boxed headers on site.

Additionally, the use of cold-formed steel on a project of this magnitude made it easier to coordinate with other trades, such as the electrician, mechanical contractor and plumber, giving them access to the building earlier than if the walls were constructed of another material.

ClarkDietrich’s testing and technical support also played a major role in making sure the project team had the right products for each application.

“When my name and reputation are on the line, I want to make sure that we are working with the best products on the market,” said Jonathan Lamb, project manager for Millard Drywall. “We’ve done a lot of work with ClarkDietrich, from large-scale jobs to smaller remodel projects. With this job being the size that it is, we wanted to make sure that we had the best out there for our guys to work with.”

The city hall project is on schedule to be completed by the end of 2019, and will no doubt raise the profile of this community of just over 16,000 in Texas hill country, which has become a popular tourist destination. And it will be a landmark the city can be proud of for a very long time.

“A project of this size is always going to have its challenges,” said Sierra. “But at the end, I’m pretty sure everyone’s going to be really proud to have been a part of this building that we hope is going to be standing for the next 100 years or more.”