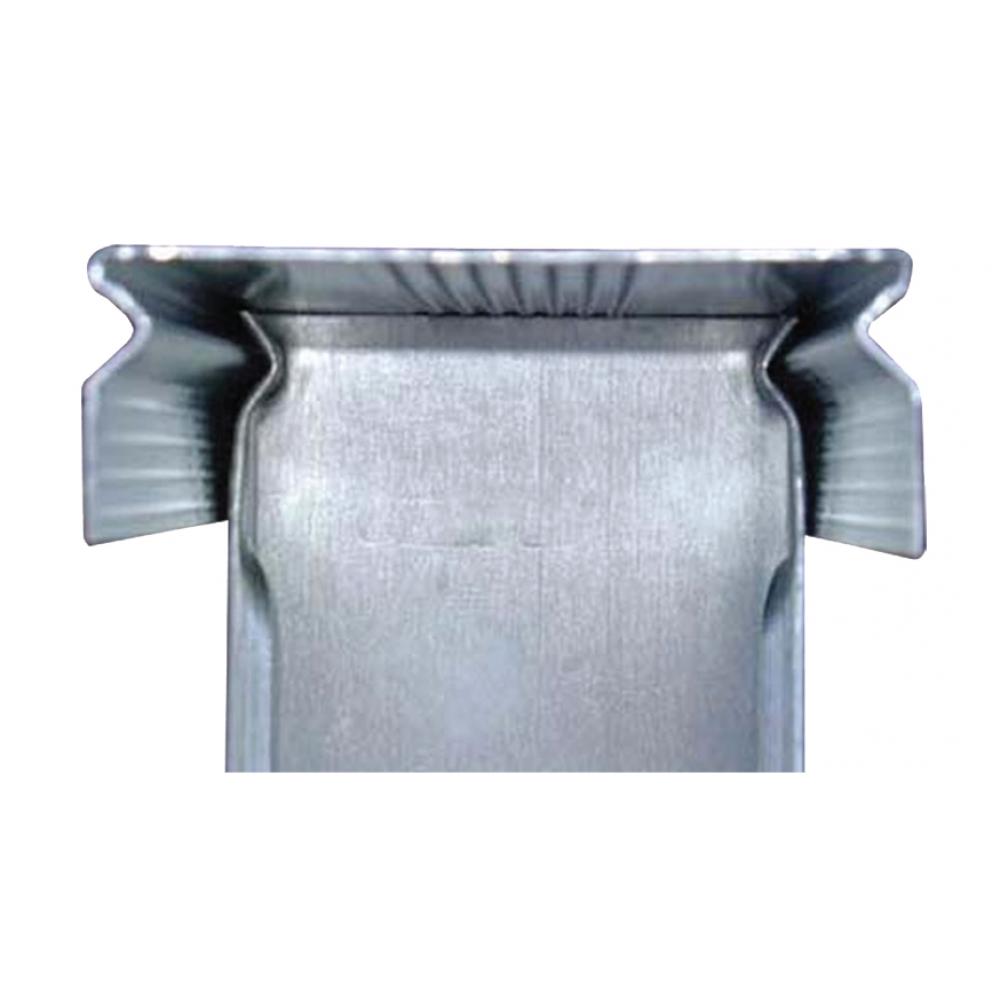 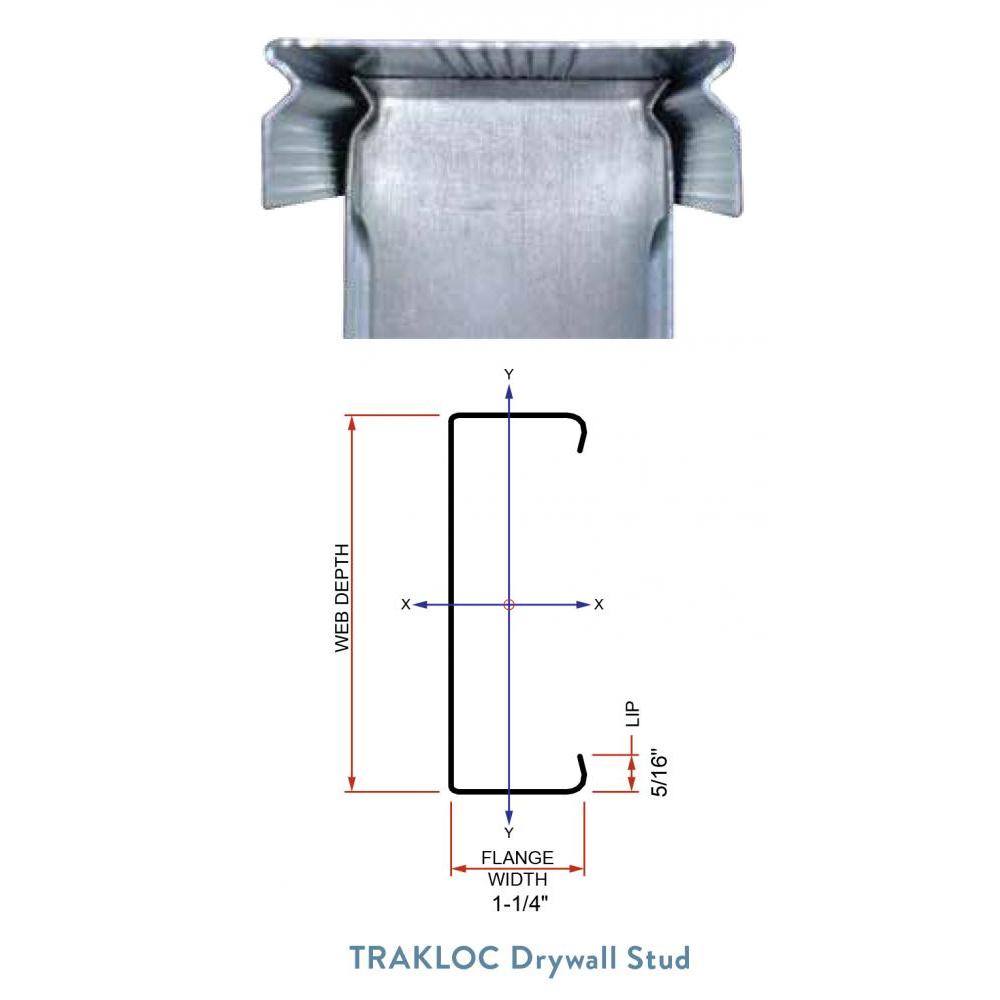 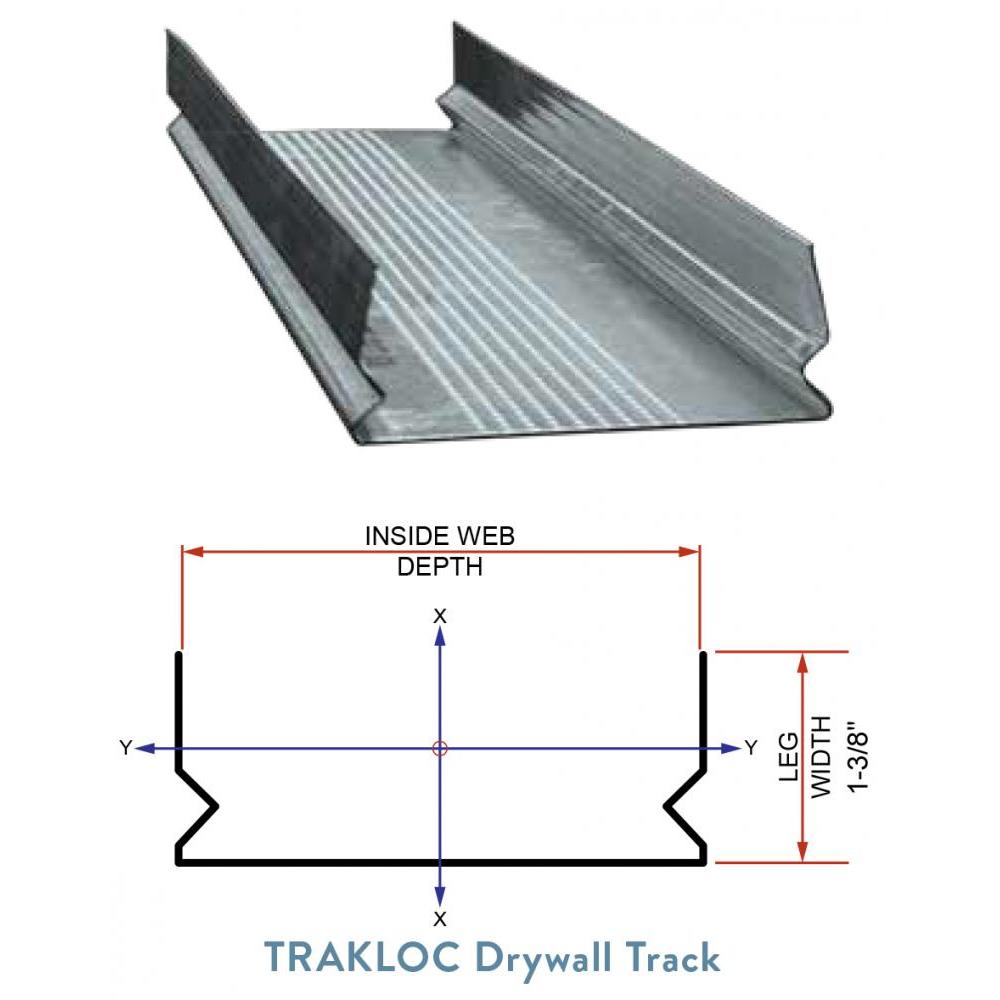 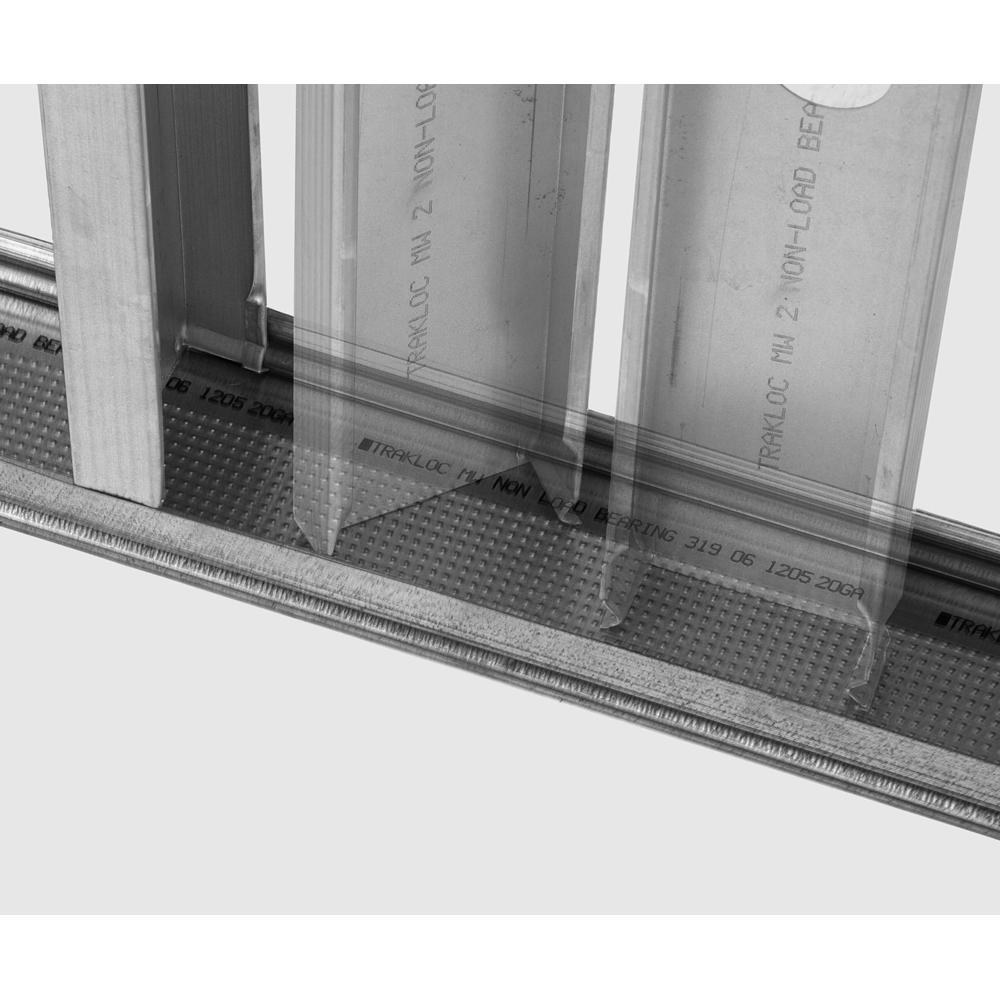 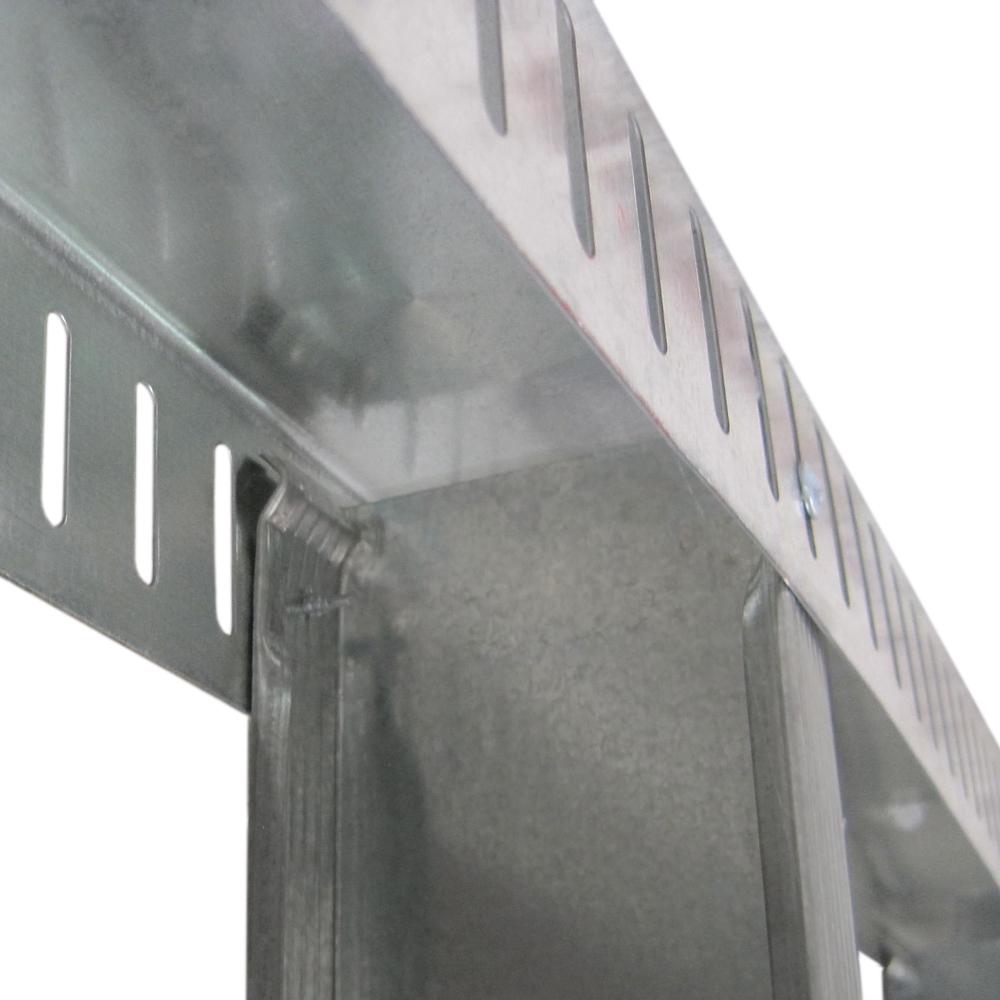 Telescopes in length to deal with variances during installation

TRAKLOC® allows you to order one length member and “adjust” the length accordingly to make up for variances in the slab. The two-piece TRAKLOC® Elevator Stud® member is compressed to accommodate stocking in a building elevator and then can be extended (telescoped) to the required length at point of installation.

A revolutionary development in cold-formed steel framing systems. Unlike traditional steel studs, which are cut to length for varying jobsite conditions, TRAKLOC allows you to order one length member and “adjust” the length accordingly to make up for variances in the slab. The TRAKLOC Stud and TRAKLOC Track systems consists of a traditional-style framing member combined with an interlocking adjustable component. The adjustable portion allows for telescopic length adjustments and can accommodate variances in the slab, minor wall heights per floor, etc. The interlocking component of the stud and track eliminate the need for most connections!

Not all TRAKLOC products are available in all markets. Please check with your local ClarkDietrich sales representative for availability in your area.

The TRAKLOC product line is licensed under the following U.S. and Foreign Patents:

The TRAKLOC Elevator stud member arrives in a compressed position to accommodate stocking in a building elevator and then can be extended (telescoped) to the required length at point of installation. This reduces the cost of stocking long studs on floors accessible only by elevators and stairways.

TRAKLOC is a dynamic system consisting  of two moving parts. To maintain the telescoping feature of this system, it is important to store TRAKLOC studs indoors, free of excessive dust and airborne particulates. 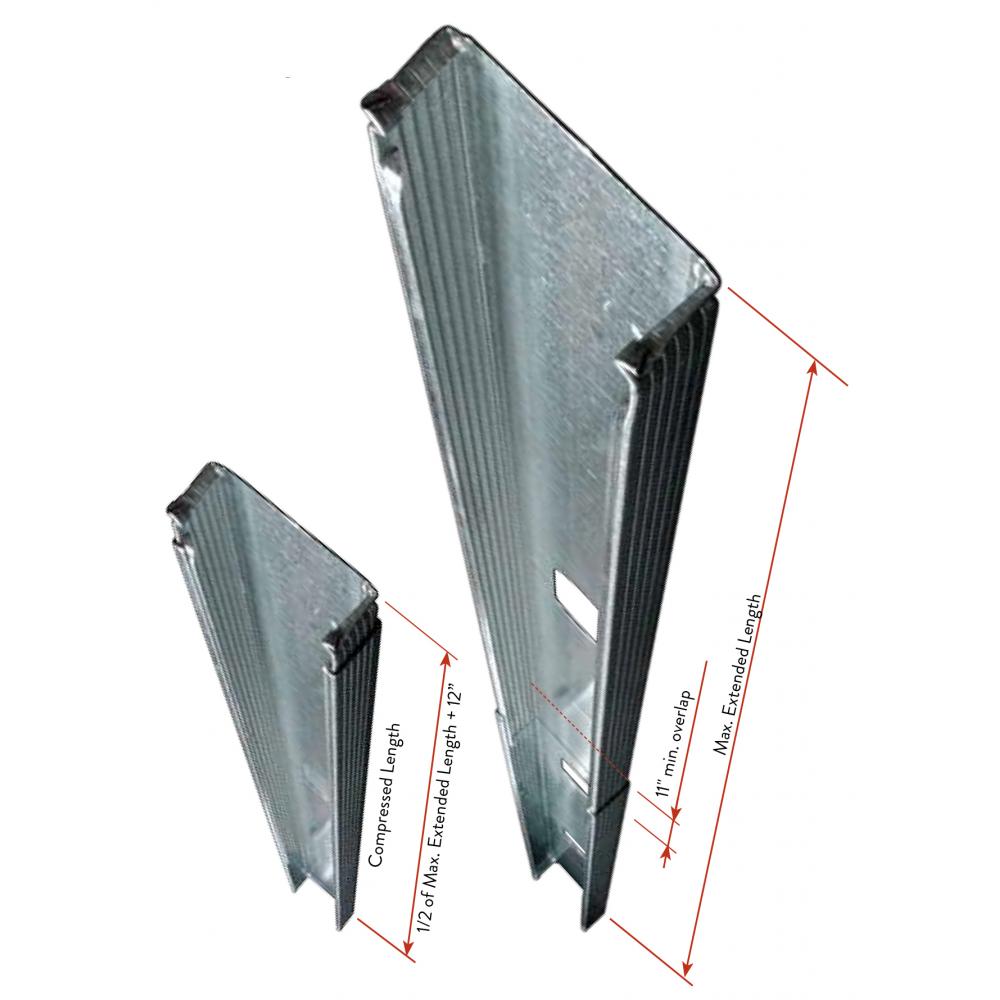 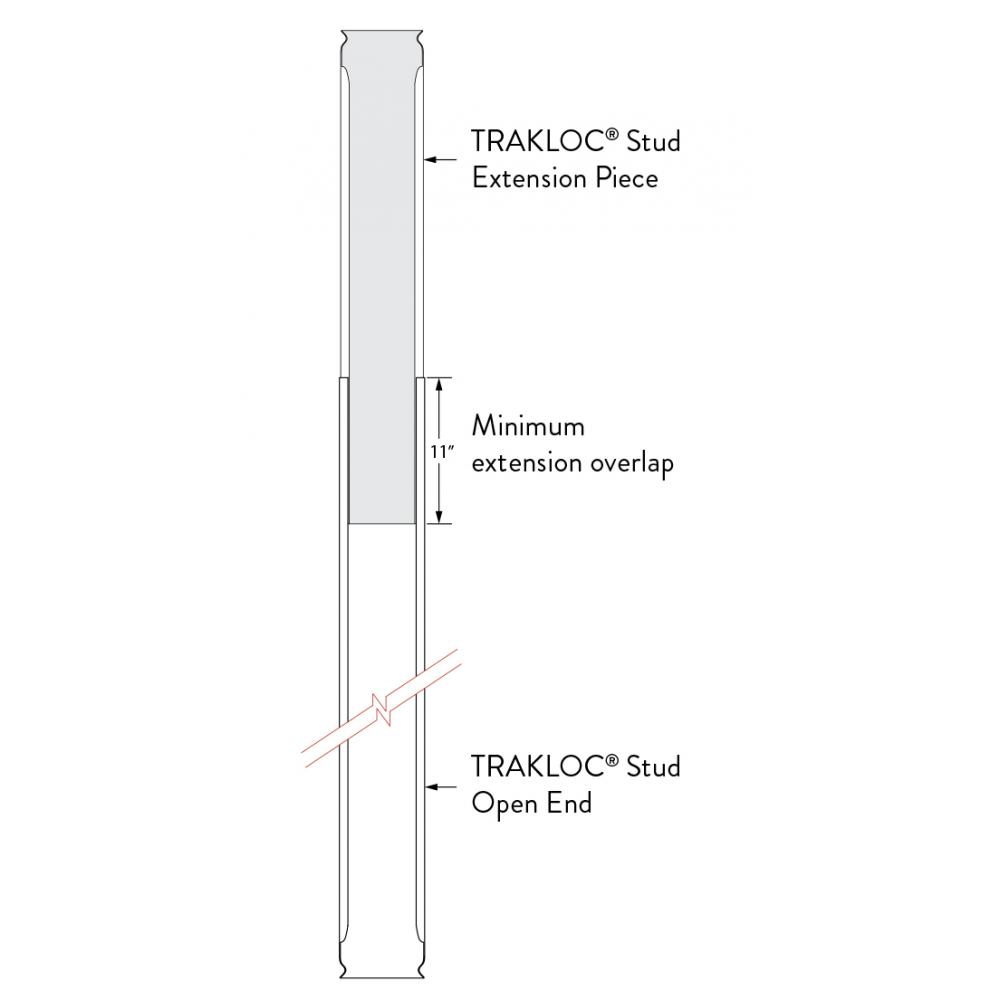 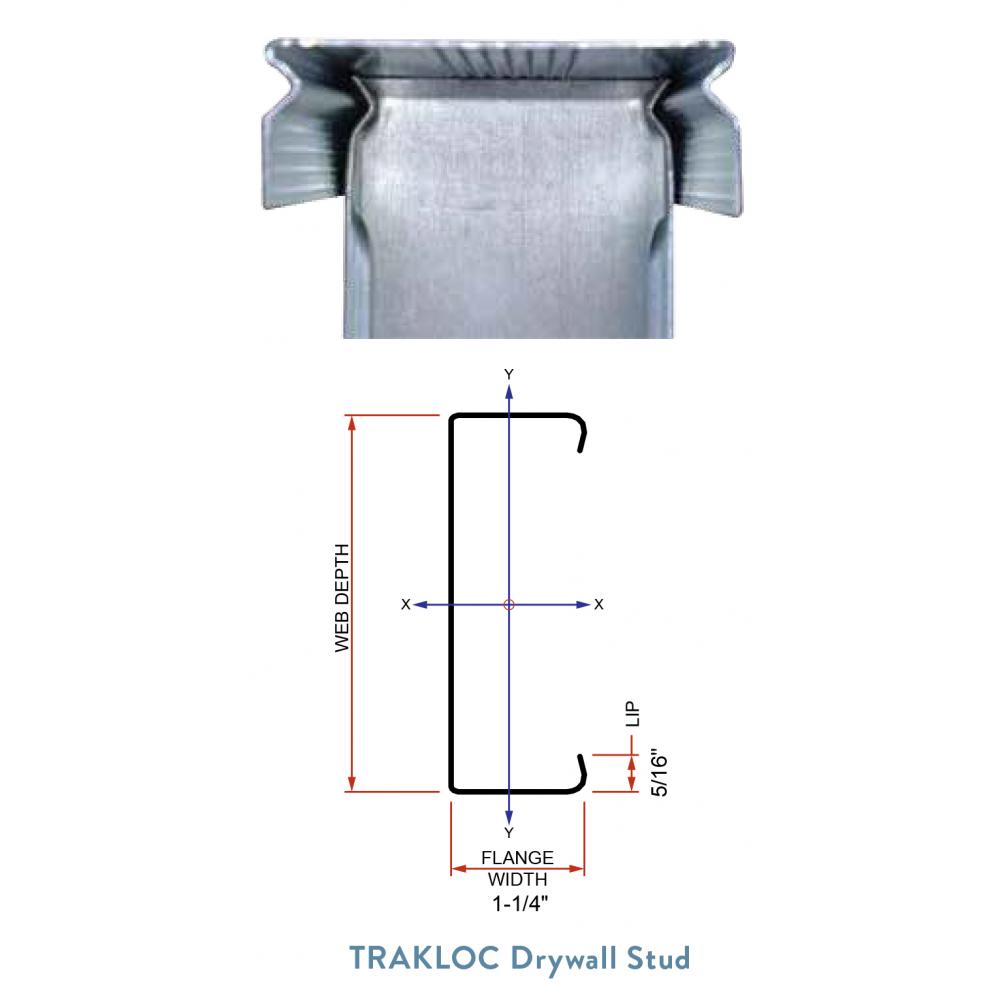 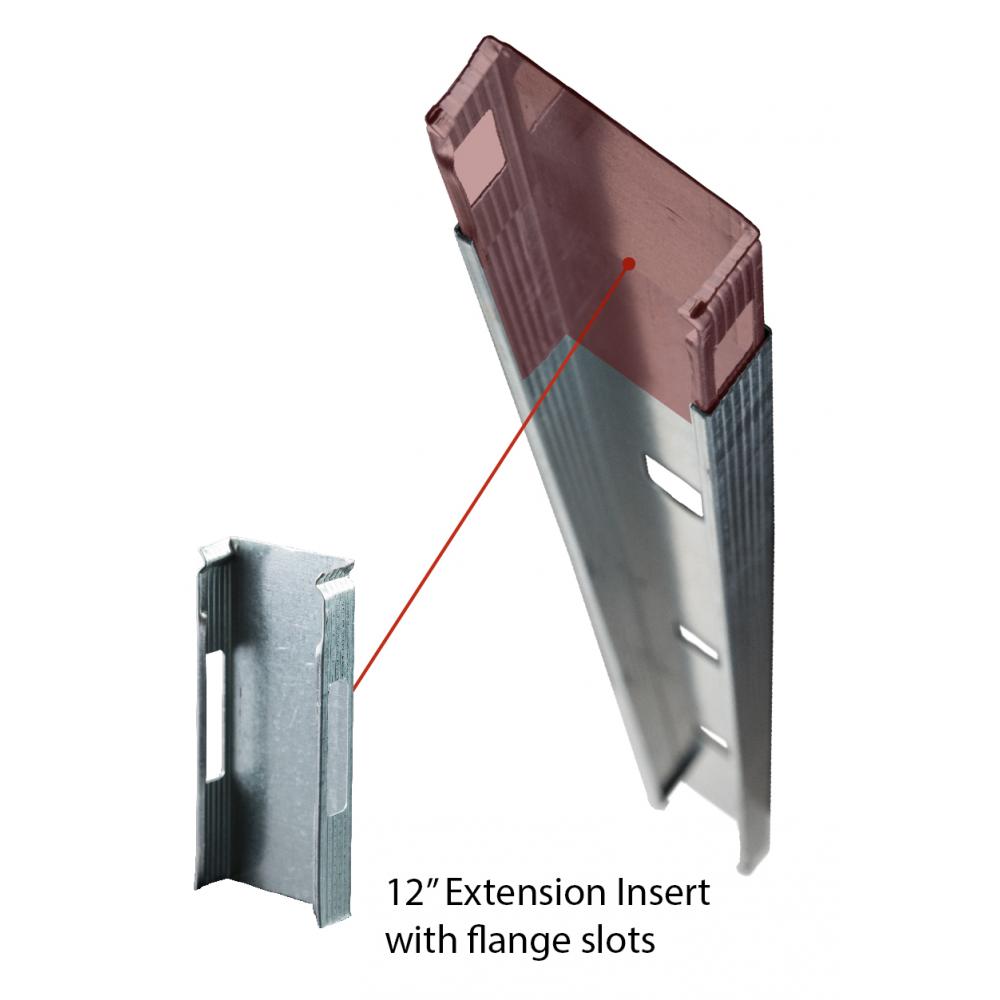 TRAKLOC track has two unique features. The most obvious feature of the TRAKLOC track is the V-groove rolled into the flanges of the track to match the swaged ends of the TRAKLOC stud.  Next, are the dimples pressed into the center of the web.  Together, the V-groove and the dimples provide a positive connection between stud and track without the need for mechanical fasteners.

NOT ALL TRAKLOC PRODUCTS ARE AVAILABLE IN ALL MARKETS. PLEASE CHECK WITH YOUR LOCAL SALES REPRESENTATIVE FOR AVAILABILITY IN YOUR AREA. 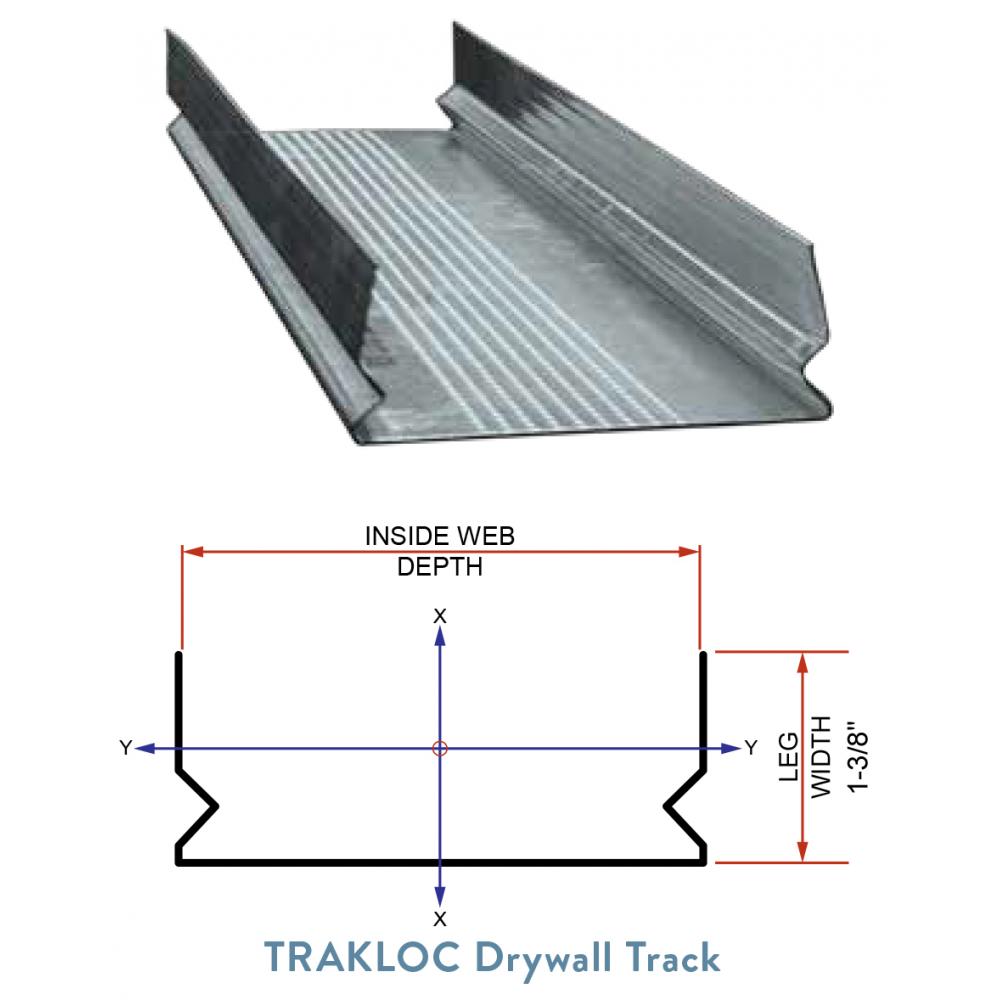 Another added benefit to the TRAKLOC system is that screw attachment of the stud and track is not required. The patented swage end formation in the stud, combined with the swaged forming of the track, allows for the two members to “interlock” with no need for screw attachment. The knurling along the web of the track allow for minor adjustments to be made while keeping the members solidly locked in place. TRAKLOC steel framing members come in standard widths of 2-1/2," 3-5/8", 4" and 6".

Single submittal sheets for the exact product you're looking for can be created by using ClarkDietrich's SubmittalPro® Product Submittal System.
For product data sheets with section properties and limiting heights for all TRAKLOC Stud & Track profiles available, use the Launch SubmittalPro link found on the bottom of this page.

(All tables below are based on the ICC ESR-1464 Report) 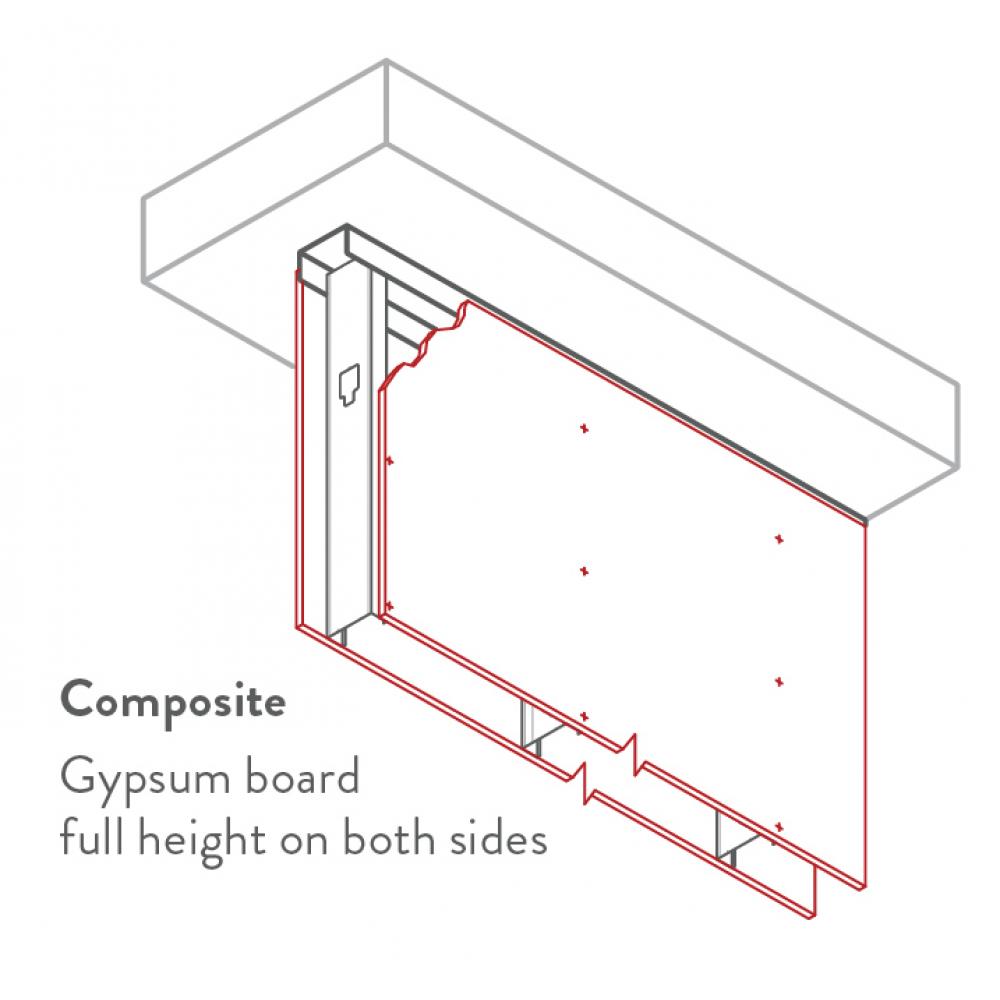 Non-composite conditions are common in all structures. When the gypsum board stops at the ceiling level, but the stud continues to the deck, it is a non-composite condition. While there may be advantages to contacting Technical Services or a Design Professional, many conditions can be covered by limiting heights tables shown below. When in doubt, call our complimentary Technical Services Hotline at 888-437-3244.

Distance of unbraced length (Lu) can be found in TRAKLOC® Physical and Structural Properties shown in SubmittalPro. 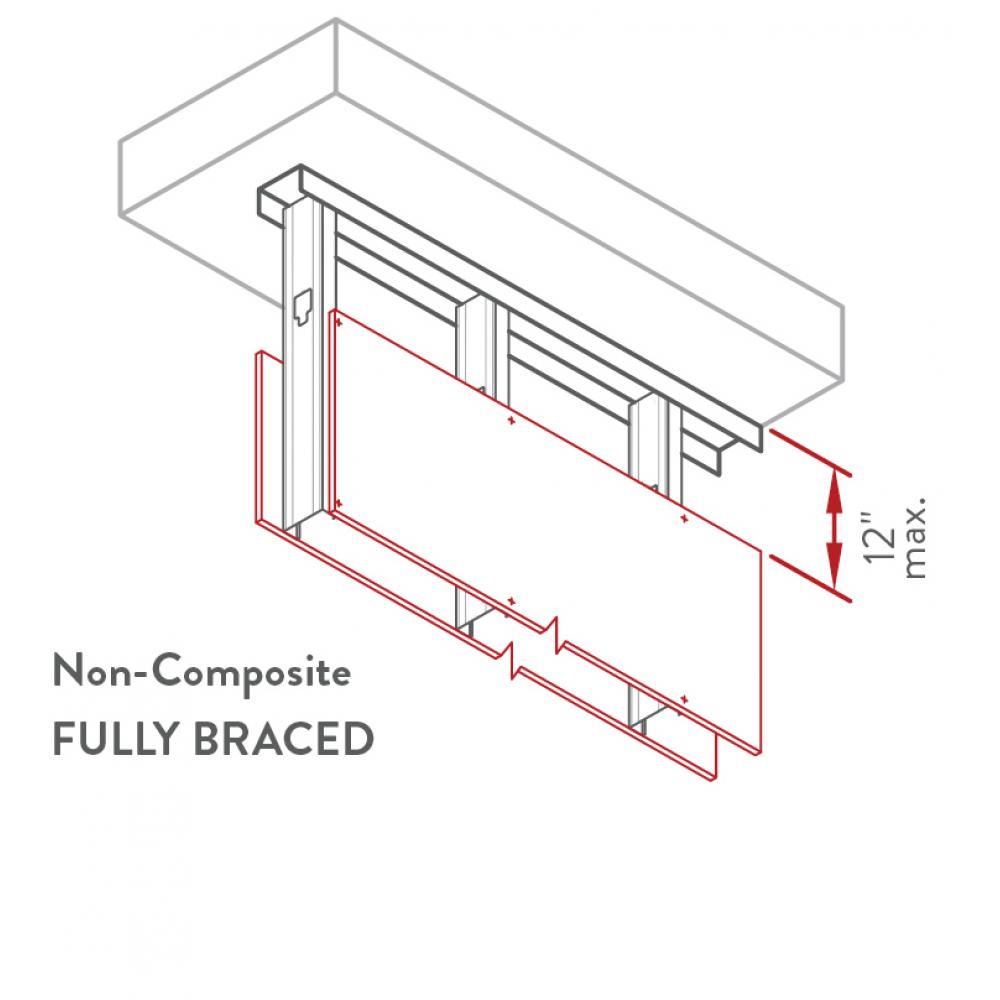 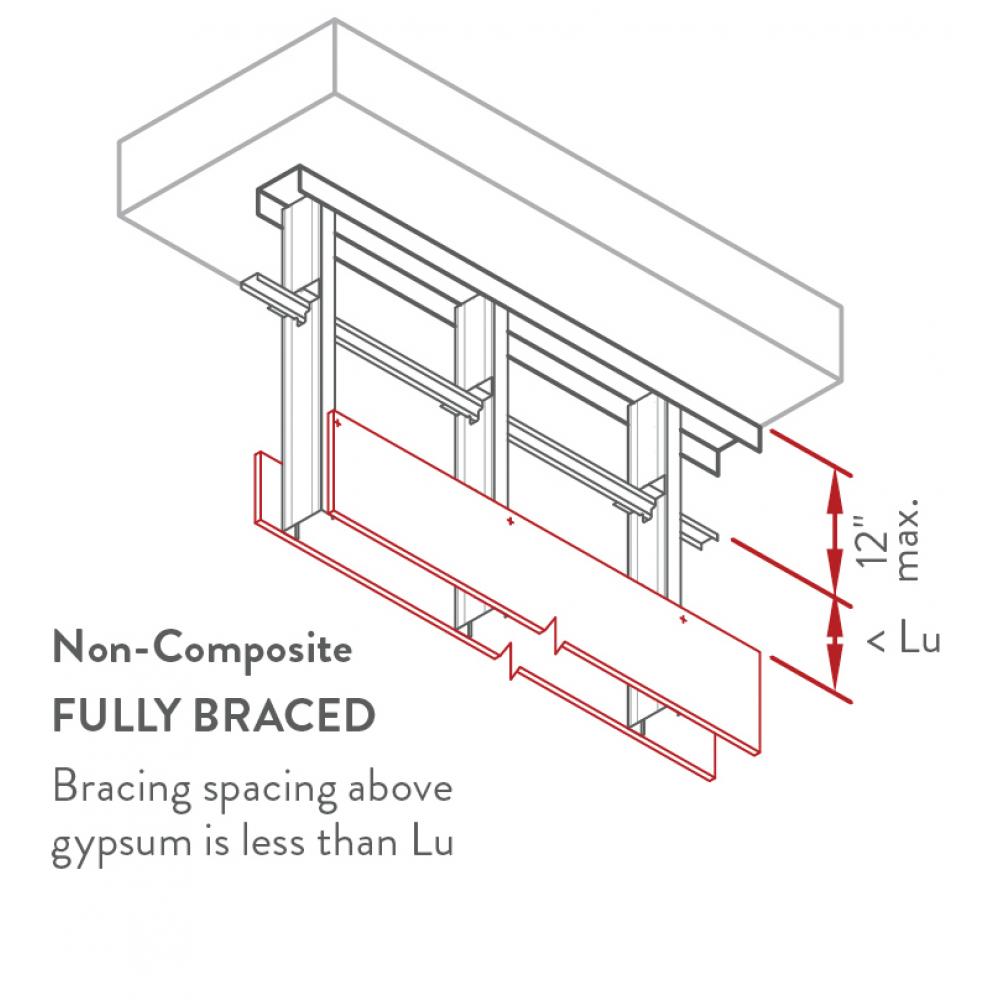 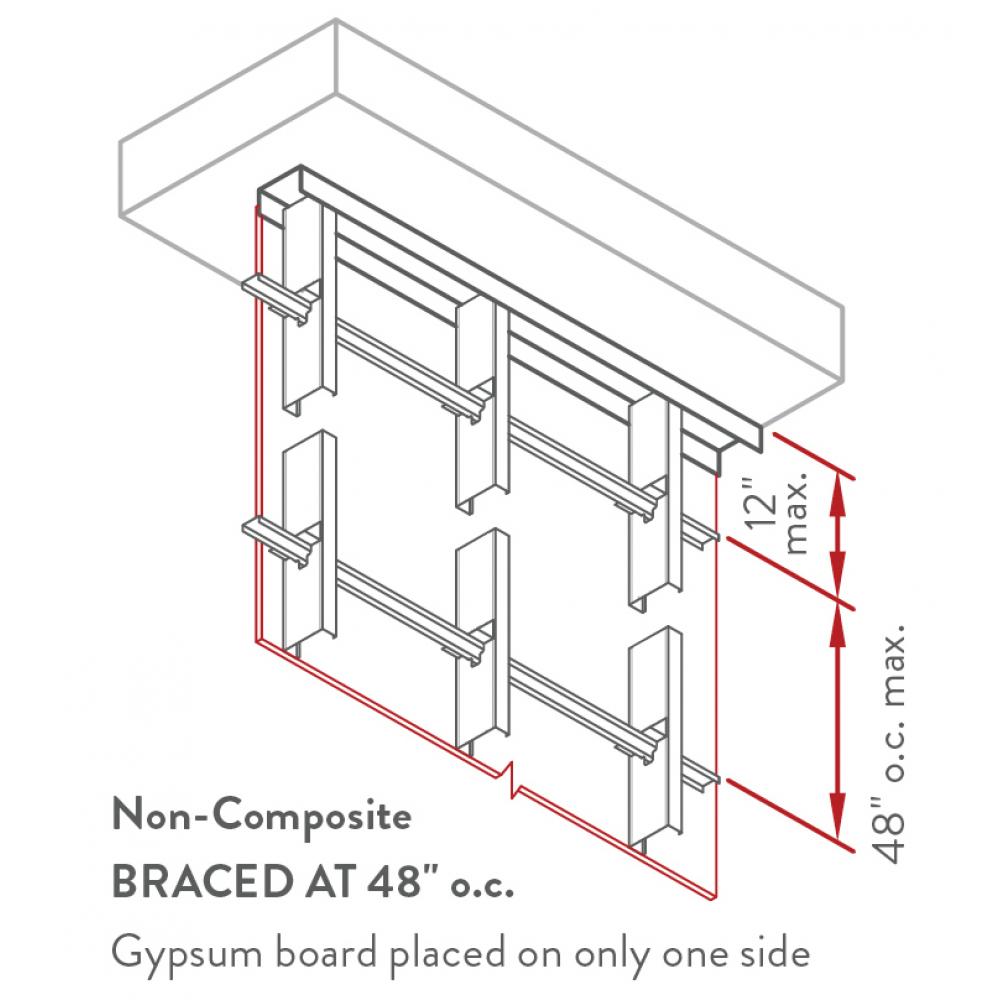 With conventional material deflection is accomplished with either deep leg or slotted track. The slotted systems are more expensive, and both systems install with a high degree of attention to detail that is frequently not adhered to. With the TRAKLOC Drywall Framing System deflection is accomplished with the stud, more specifically with the insert of the stud, eliminating the need (and expense) of either of the specialty tracks or variance in the framing process.

The unique method by which the Trakloc Steel Framing system accounts for deflection eliminates the two most common mistakes made with conventional material. With deep leg track, many installers raise the stud off the bottom track to have it fit into the top track. This method places the load bearing capabilities on the screw, not on the stud which is out of spec. When using slotted top track, the top screw is often either too high or too low, both of which are also out of spec. Trakloc’s® slotted insert eliminates both pitfalls. 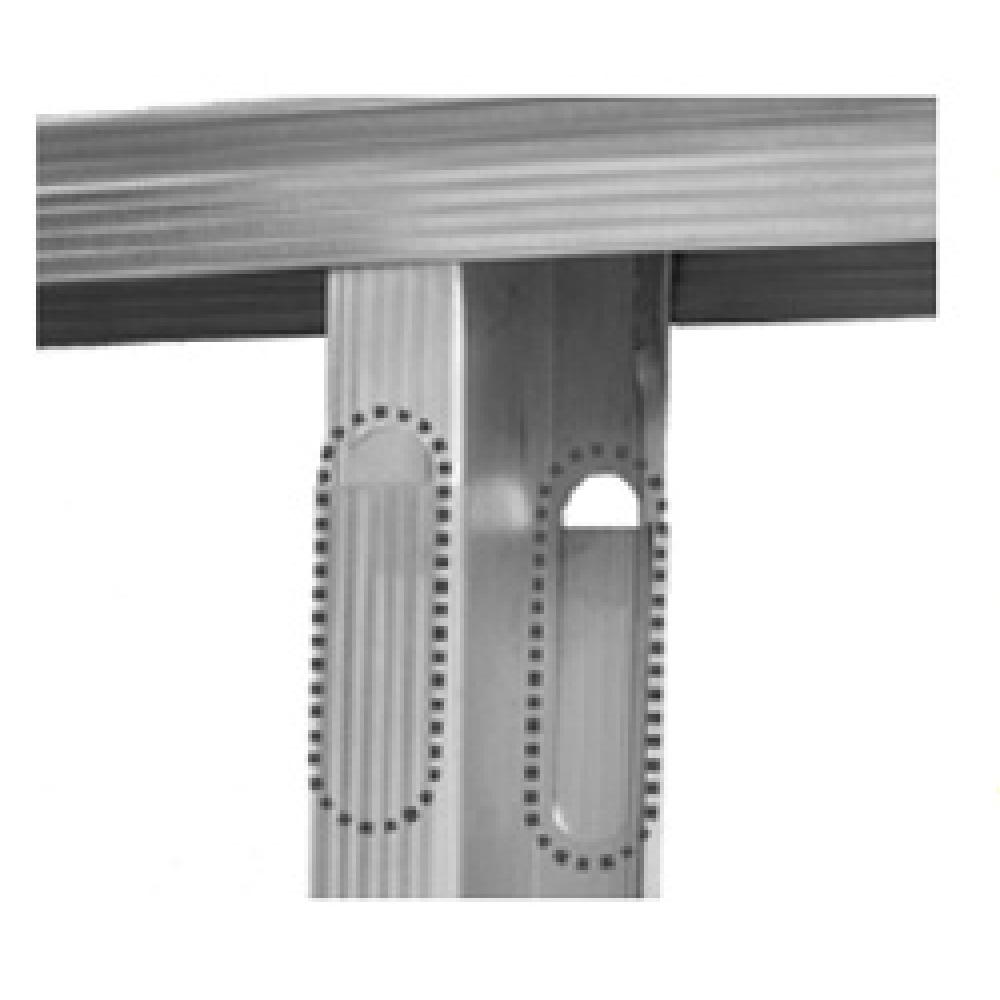 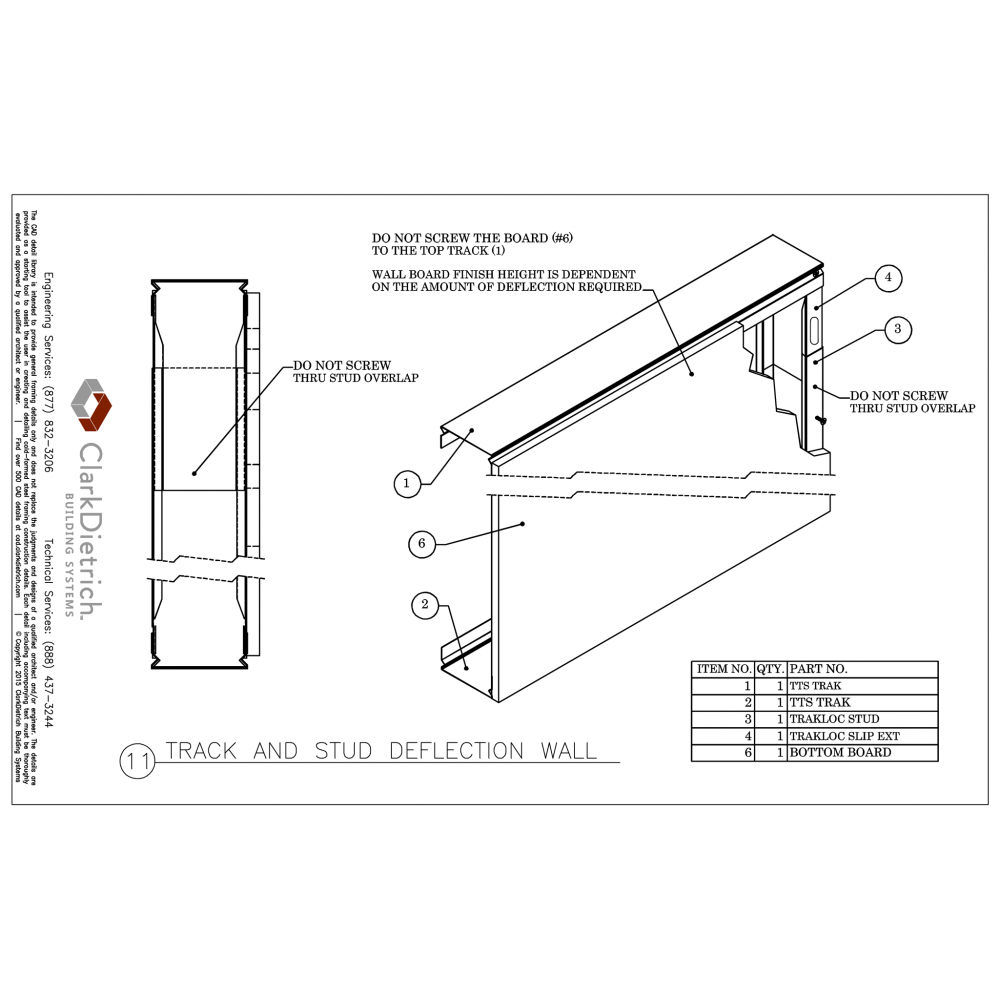 Elevator Studs are not for deflection by themselves. However, deflection can be achieved by using MaxTrak® slotted deflection track or deep leg track
with lateral bracing at the head of the wall. 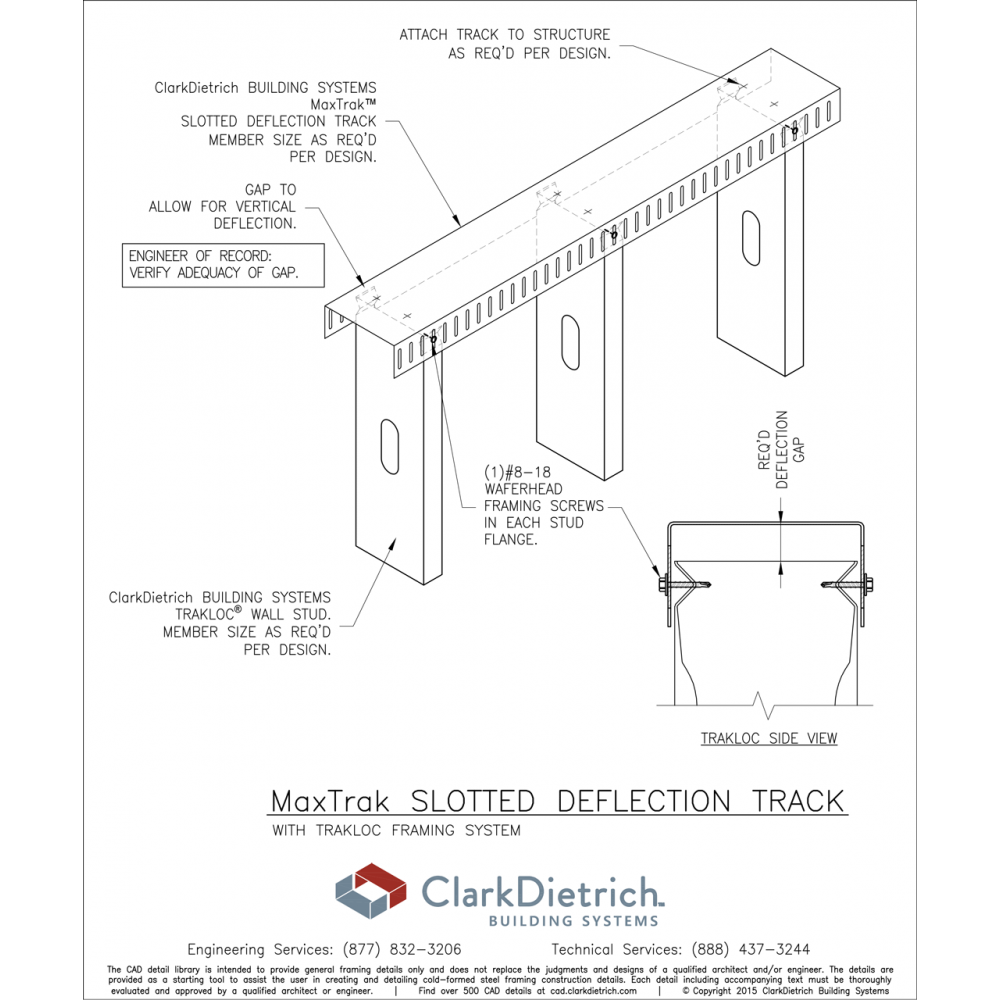 Based on the information currently available, Veneklasen Associates, Inc. (VA) professional opinion is that the acoustical performance of the TRAKLOC® will be similar to the ProSTUD® meaning that the reported STC ratings for the ProSTUD® can be used interchangeably with the TRAKLOC®. 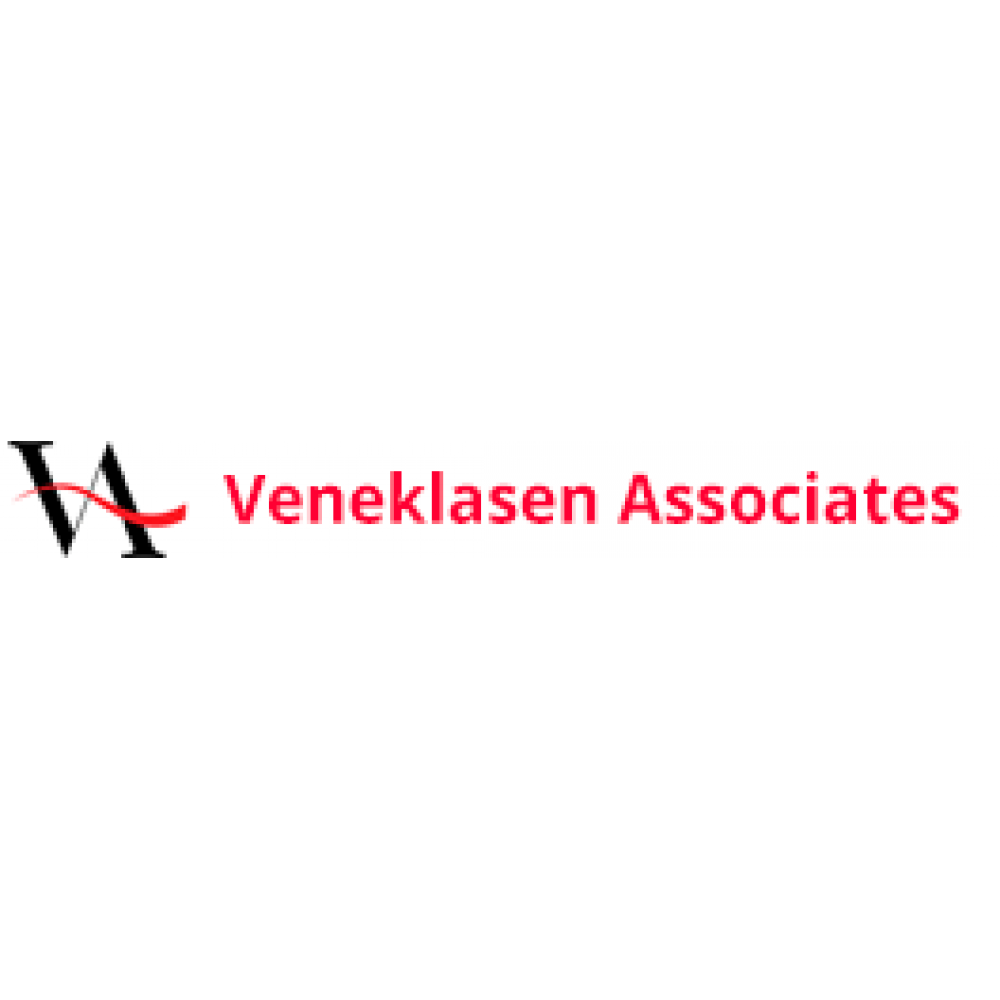 The TRAKLOC system is Intertek Warnock Hersey Design Listed and approved for use in both one and two-hour fire-rated assemblies requiring deflection in accordance with ASTM E119 and ASTM E1966. 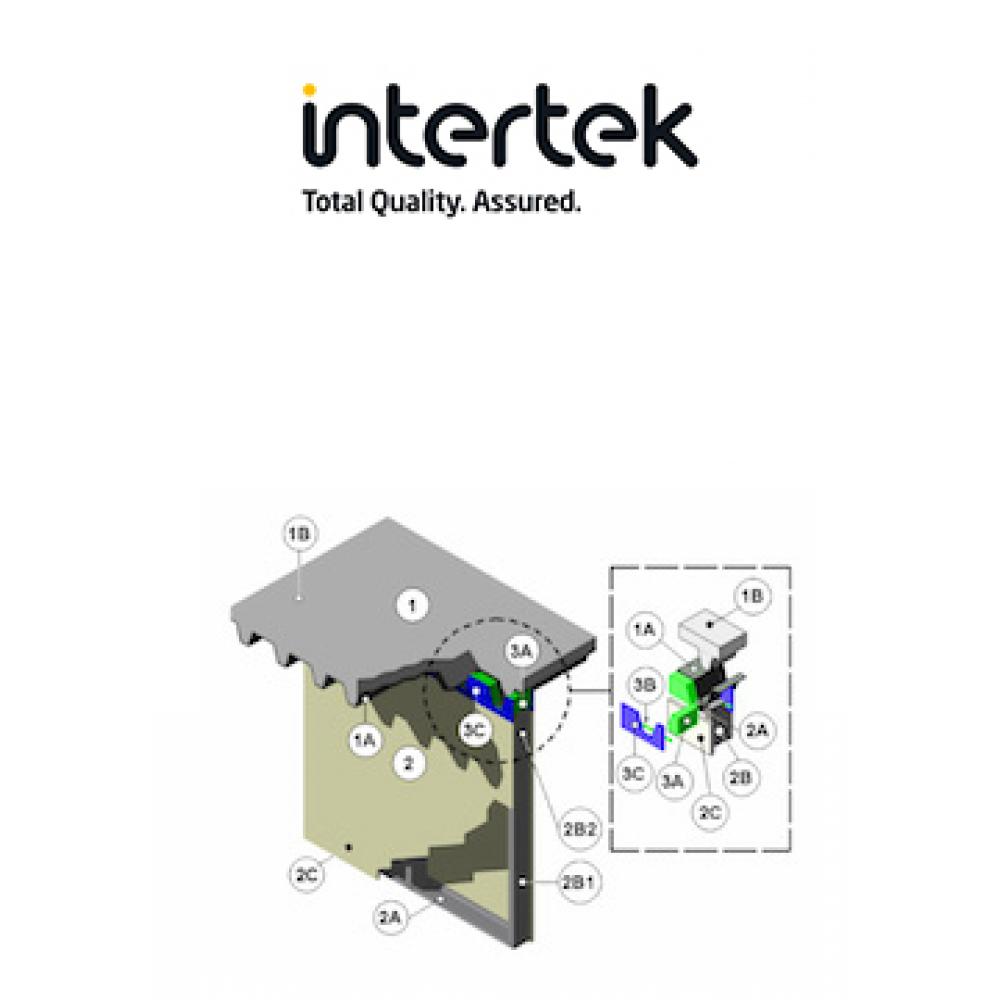 The thought process for installing TRAKLOC Drywall Framing does not fundamentally differ from installing conventional stud and track in that you will still have open or closed corners, door and window headers, and king and jack studs (as called for in the plans). What you will not have are returns (mitered cuts) or the material build up caused by these cuts as these are replaced with pre-made cripple studs and header clips. But, as with conventional material, installation starts with the track.

FOR A FIXED STUD SYSTEM

As a rule, TRAKLOC track installs the same as conventional track. This applies to top and bottom track, open and closed corners, with the only exceptions being the splice method for top freestanding track, when the Split Lap would become your splice of choice. However, with TRAKLOC track you will want to be a little more conscience of where the layout marks are as using too many pins may interfere when twisting a TRAKLOC stud into place. The only other suggestion would be that when cutting bottom track, also cut a piece for the door opening as this will become the track used in the door header assembly. Except for these two considerations, installation is the same.

You will be amazed at how easily TRAKLOC studs install, and depending on the thickness and wall height, how easily it can be done from the ground. Vertically position the stud between the track, raise the top end (the end with the Stud Extension) until it seats fully into the top track and twist until it becomes perpendicular to the track. It does not matter whether you twist clockwise or counter-clockwise, but you will want to start your twist with the leading edge right on the layout mark. Once twisted, if your stud is not positioned on the top layout mark, just reach up and tap the stud into position, then pull down on the Main Stud while twisting the stud to be parallel to the bottom track and fully seat it into the lower track. Once seated, release the twist to lock the bottom of the stud into the lower track. If the stud is not on the layout mark, simply tap the stud with your boot in the direction it needs to go and you are done. Installation is now complete.

With TRAKLOC there is no need to measure and cut your stud to length, no need to climb on ladders or bakers scaffolds to screw the top into the track, no stooping to screw the bottom into place, less chance of repetitive motion injury, less chance of shards created by the screw from falling into your eyes, and less scrap to trip over on the job site. Real world experience has shown that you will be able to install substantially more lineal feet of studs while expending less energy than with conventional material. 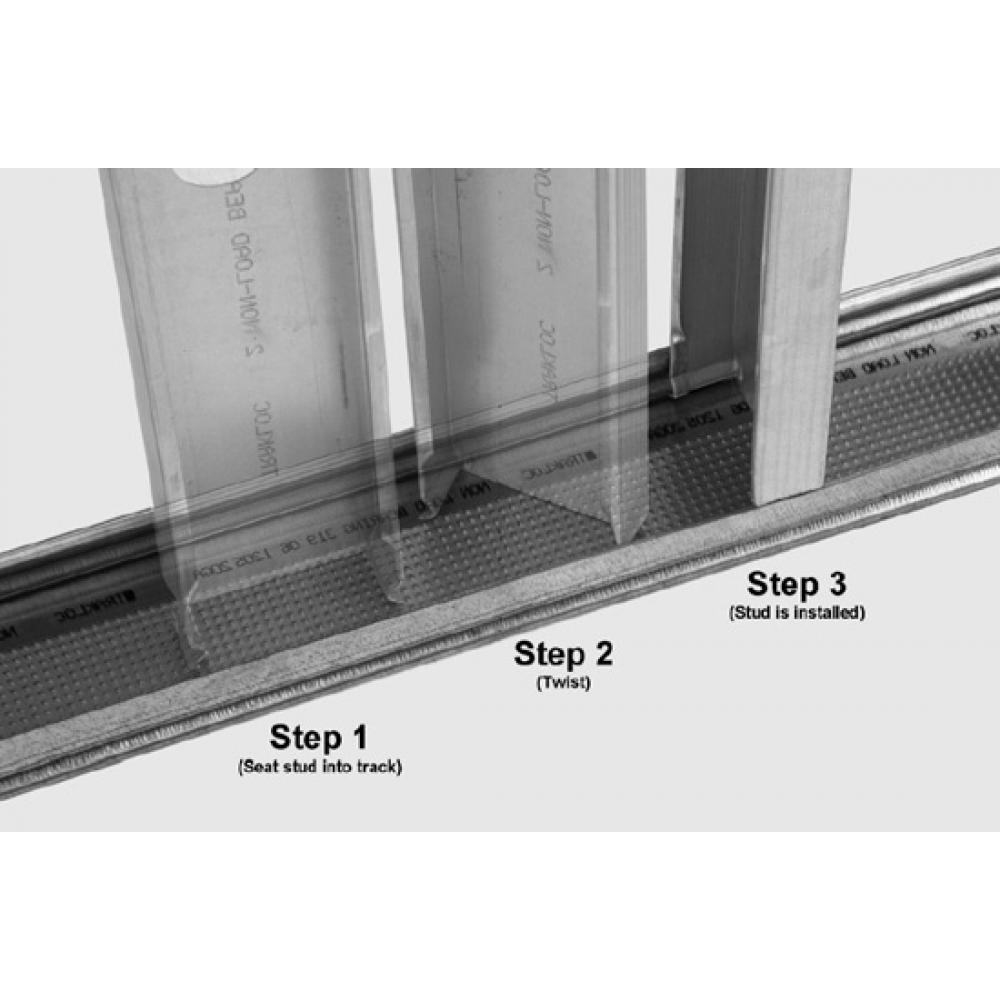 INSTALLATION WHEN DEFLECTION AT HEAD-OF-WALL IS REQUIRED 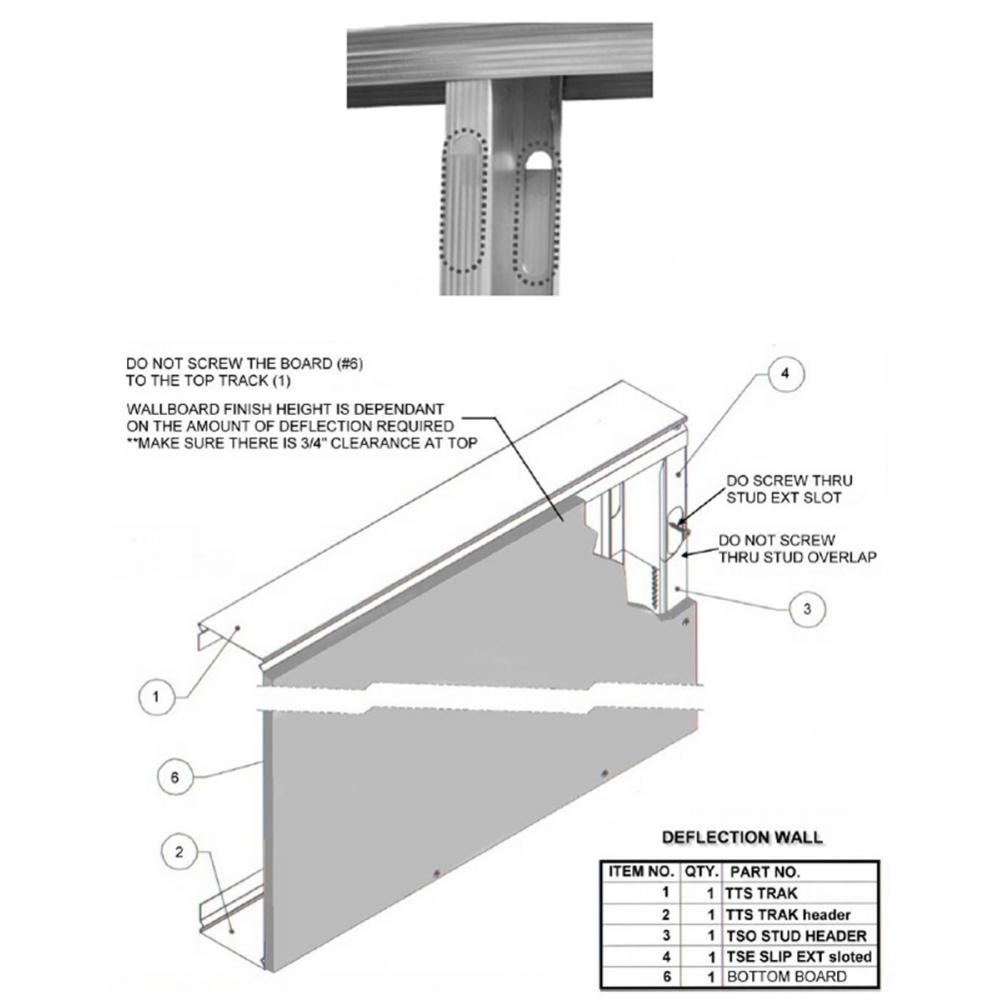 Field installers report that they find open corners to be the better option, but TRAKLOC accommodates both. It has been observed that closed corners involve more cutting and therefore take more time. 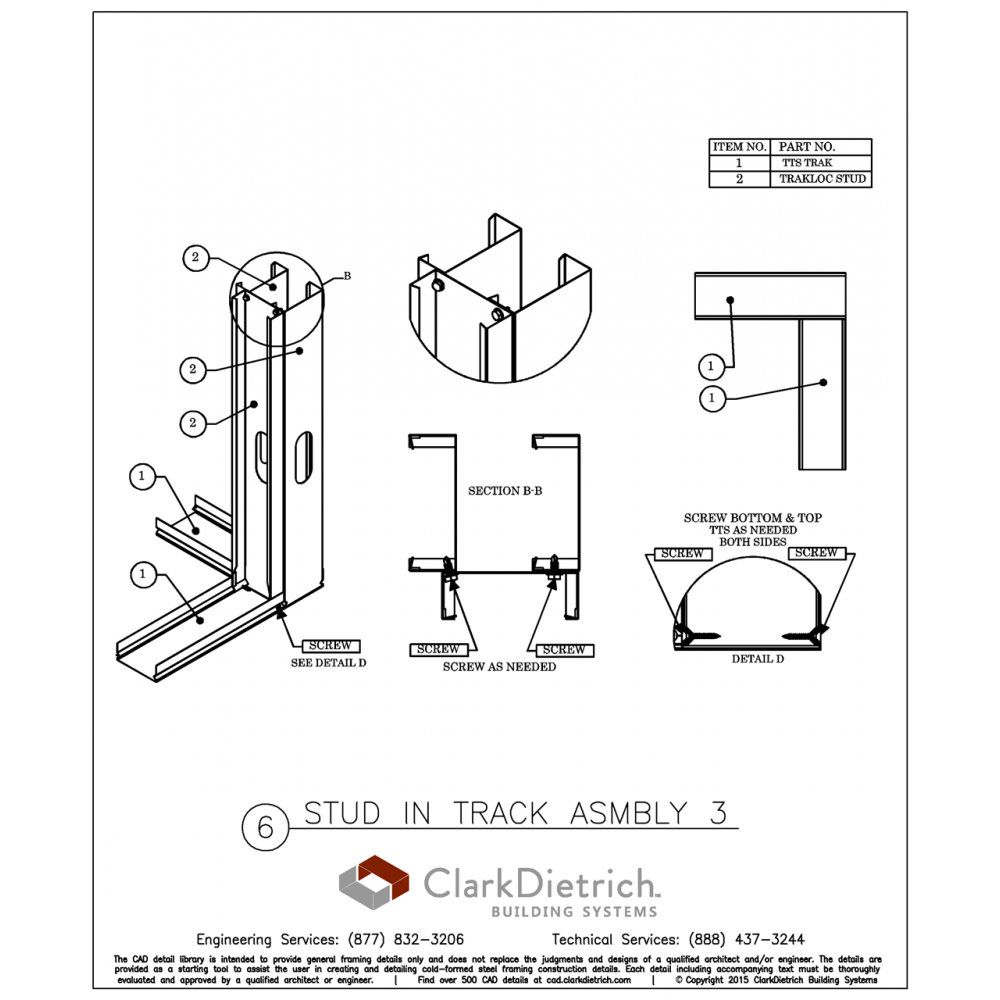 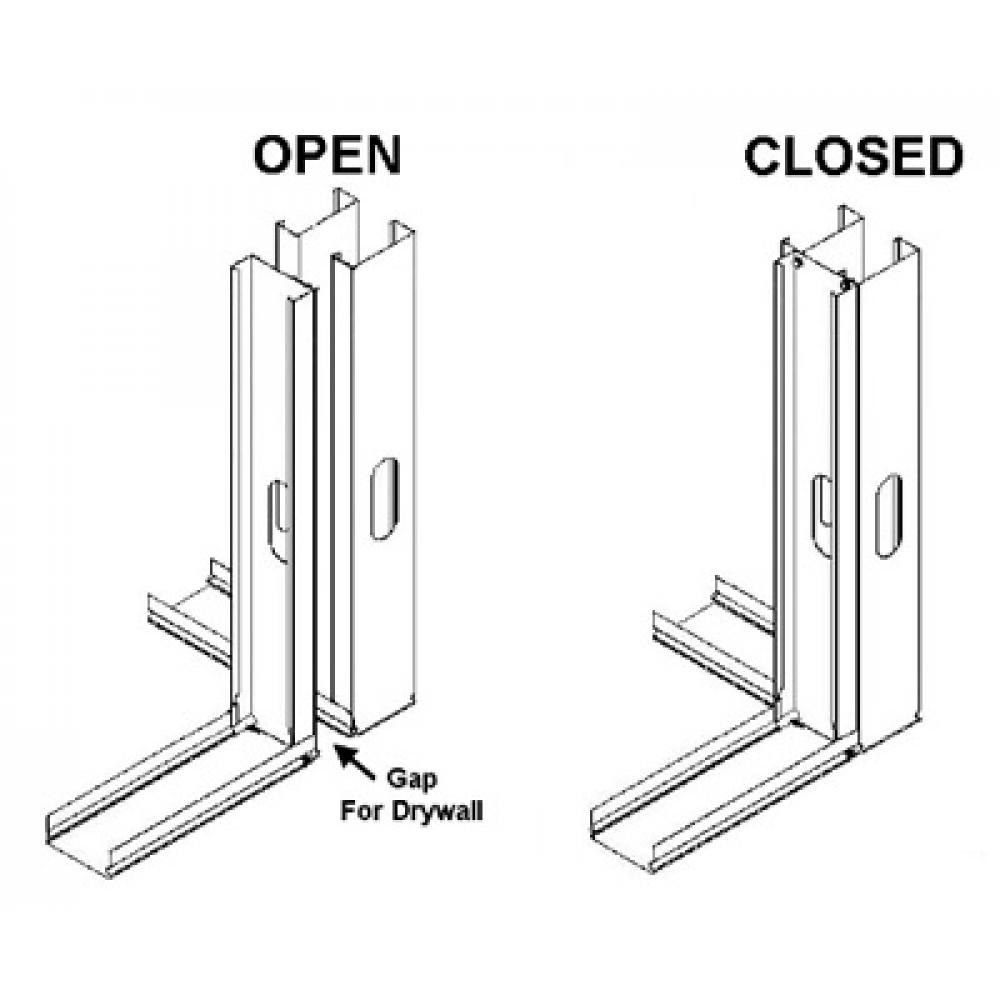 One of the most substantial time saving elements of the TRAKLOC Steel Framing system is its treatment of headers. Headers are horizontal spans of track used between door and window openings to provide a horizontal screwing surface, as well as support for items such as duct work.

Instead of using miter cuts, TRAKLOC track should be cut to the size of the opening and attached with TRAKLOC Cripples Studs or TRAKLOC Header Clips. With this technique there are two alternatives.

Using TRAKLOC Header Clips requires less material while using all TRAKLOC Cripple Studs will provide more structure to the opening. Either of which are acceptable, but check your plans for guidance.

It may appear that the V-Grove extends outside the web, but this is not so. At door header assemblies and other intersections of track and stud there is no material build up. When screws would be used, such as door header assemblies, it is recommended to screw into the V-Groove at a 45° angle so the screw head will be recessed. 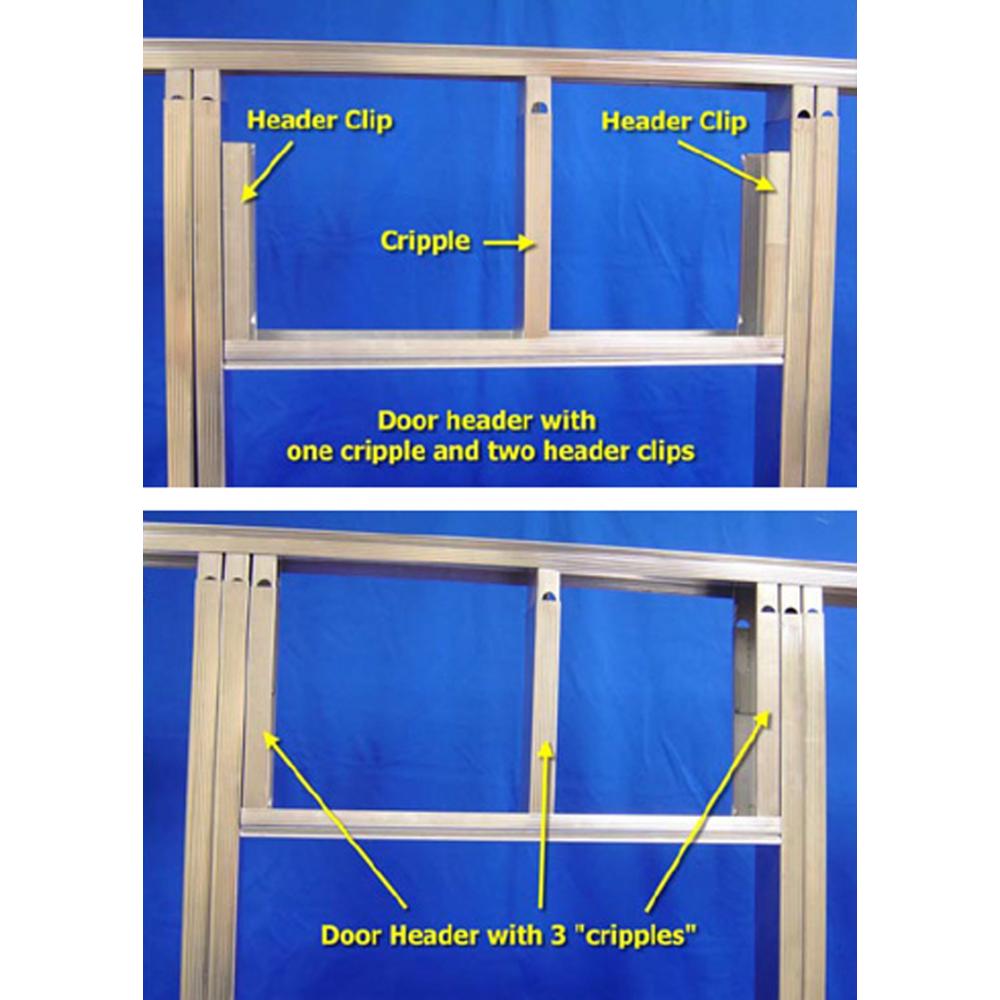 Half walls are easily adjusted to the correct elevation and level with TRAKLOC Cripple Studs. It is recommended to place screws in the overlap to maintain a level surface and stabilize the structure. 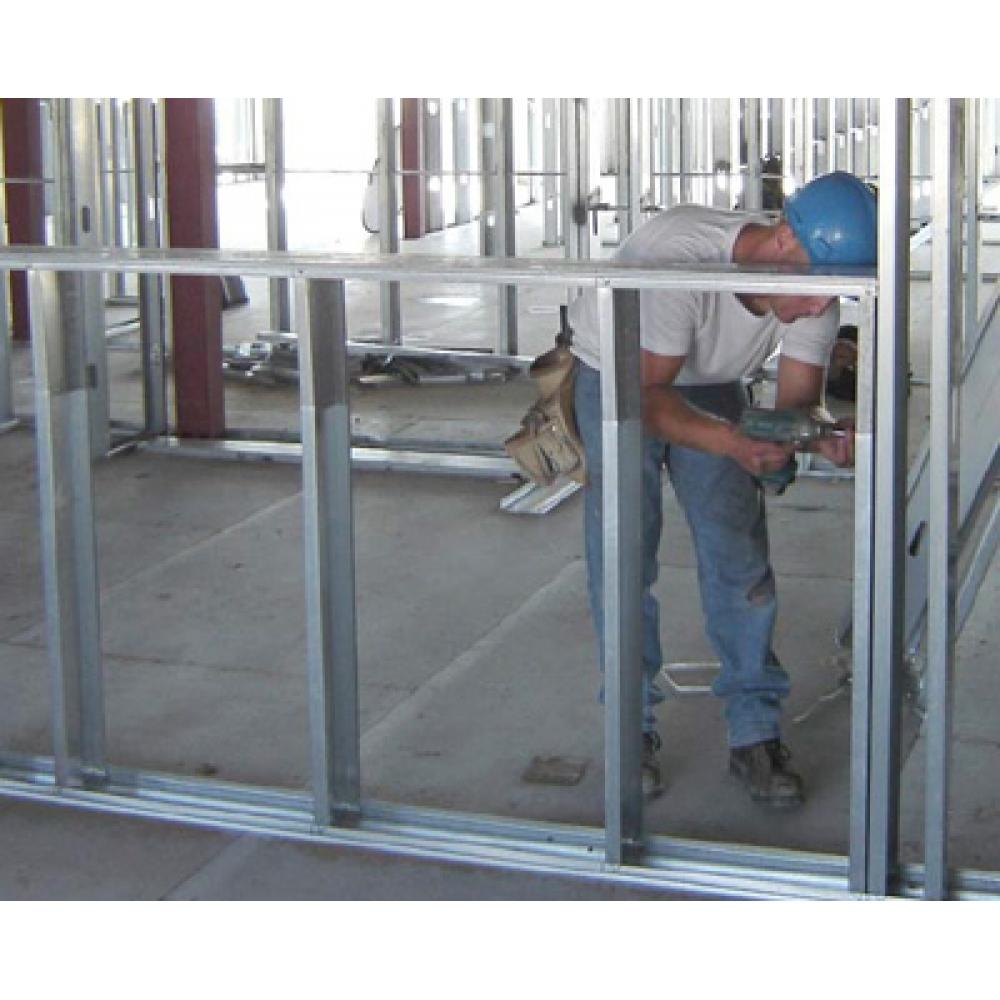 Another use for TRAKLOC Cripple Studs are soffits. Soffits can be made on the ground, without cutting, and then installed. Layout four pieces of track and snap in the Cripple Studs where appropriate. Take one of the two “ladders” you have just created and install in the appropriate place as the vertical member, fastening it to the deck. Laser (or level) the bottom track to assure levelness and place screws in the overlaps to maintain its proper positioning. Take your second “ladder” and fasten it to the bottom of the vertical member and the wall studs. 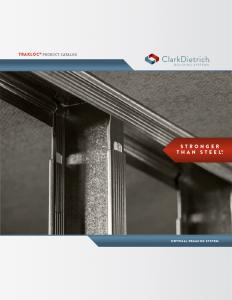 For creating product submittals to attach to these forms use ClarkDietrich's SubmittalPro Product Submittal System.

The TRAKLOC system is Intertek Warnock Hersey Design Listed and approved for use in both one and two-hour fire-rated head-of-wall assemblies requiring deflection in accordance with ASTM E119 and ASTM E1966.

Specifying ClarkDietrich's TRAKLOC Drywall Framing system in your Architectural Specifications opens the door for contractors to utilize our superior product line. By including TRAKLOC in your project specification, you eliminate the time, effort and cost involved with the substitution and approval process.

The suggested specification language provided below provides a framework to include ClarkDietrich Building Systems as a preferred Manufacturer for Cold-Formed Metal Framing Systems. This language will not replace what you currently have in your project specifications, it will only add to it, to ensure TRAKLOC is approved on your next project.

How does TRAKLOC save the steel framing installer time?

How does the TRAKLOC system allow for vertical inter-floor deflection?

Is TRAKLOC approved in my area?

How much does TRAKLOC cost compared to conventional steel framing?

What are the available TRAKLOC sizes and steel thicknesses?

Is installation of TRAKLOC Track any different than conventional track?

Can I install a TRAKLOC Stud anywhere along the TRAKLOC Track?

Can TRAKLOC be used in load-bearing walls?

What do I do if a plumber or electrician moves the TRAKLOC stud off layout?

What is the maximum length of TRAKLOC studs?

Are all TRAKLOC studs telescopic?

Do TRAKLOC studs have service holes?

Can TRAKLOC be ordered in custom lengths?

How long has TRAKLOC been in use?

How do I cut TRAKLOC studs and track?

Are mechanical fasteners ever used with the TRAKLOC system?

Most common TRAKLOC submittals can be found below: