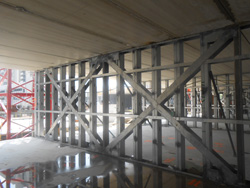 “When ClarkDietrich added punchout capability to their HDS structural studs, it allowed us to smoothly incorporate them into our wall panels, greatly improving their load bearing capacity compared to standard stud shapes. With that increased load capacity, we could engineer taller, stouter light gauge steel structures with a lot more confidence,” said Barry Unger, president of Panel Systems, Inc., a company that engineers, fabricates and installs light gauge framing components for walls, floors and roofs.

Mac McIntosh of the building materials supplier ProBuild concurs. He says Panel Systems, which works closely with his team, is constantly looking to bring innovative approaches to cold-formed steel bearing structures and knew the HDS Framing System could play well into high-rise developments. “Upon our urging, the ClarkDietrich crew invested substantially in equipment and engineering to expand the possibilities for HDS,” McIntosh said.

Unger and his crew got a chance to test their hypothesis when they won the opportunity to design and manufacture prefabricated wall systems for the massive Dalian on the Park development in Philadelphia. The design team for the project had utilized light gauge bearing walls before and were impressed by the time and cost savings they had realized on the project. The development of the new HDS stud weighed heavily in their decision to utilize the same structure for the new nine-story apartment tower. Importantly, the factory-made walls would also drastically minimize traffic disruptions in the bustling neighborhood since the walls would ship ready-made to the construction site. Structural engineers with the Harman Group of King of Prussia, Pennsylvania, vetted the idea and approved the development to proceed with the prefabricated light gauge structural system. 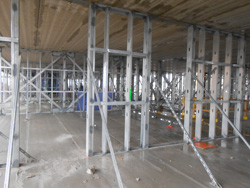 A Tall Order
Dalian on the Park was built atop the new Rodin Square, a $160 million mixed-used development that sits on a three-acre plot in a busy quarter of the city. The area features a 55,000 square-foot Whole Foods, 5,000 square-foot café, office and retail space, 293 luxury apartments, and 30,000 square-feet residential amenity space. It has been a significant construction project to say the least, and Panel Systems provided the approved prefabricated walls for the nine-story residential portion of the development, which sits atop the high-end grocery store.

Her team of structural engineers worked closely with Panel Systems to refine the panelized wall design before prefabrication occurred. Much of this involved engineers from Matsen Ford Design Associates of Waukesha, Wisconsin, who tailored the heavy-duty studs to fit the exact design and structural specification for the panelized walls. It was a two-year effort, but one that paid off and one that will likely be repeated on other tall structures built in the future according to all involved.

The wall components provided by ClarkDietrich not only support nine floors of precast concrete plank, they provide the entire lateral bracing system, eliminating the need for reinforced masonry shafts or special structural steel elements. Moreover, the structural stud walls provide the backup for a significant amount of the interior drywall, saving the time and expense of an independent drywall framing operation.

Unger further explained, “There are tremendous gravity loads on first level of the residential tower. Many studs have to carry upwards of 50,000 pounds. The HDS studs can take these incredible loads. Normally at that load level you’d be looking at structural steel, but with the HDS Framing System you are looking at a light gauge steel member.” All this strength without need for a masonry core.

Getting It Done
Once the walls were built, they shipped direct to the jobsite where the construction crew methodically erected the stunning z-shaped nine-story residential tower one structurally sound wall at a time. It took a total 36 flatbed trailers and 120 days to complete the 340,000 square-feet wall install, which was right in line with the construction schedule.

Each level of the building was divided into four sections, one trailer of wall panels per section.  The panels were lifted off the trailers and set directly in place. Once the panels were completely installed and braced in one section the precast plank was set while the walls continued to be installed in the next section. This resulted in no down time between trades.

“I think the panelized walls turned out to be an economical solution for the residential portion of the development. It meets the design parameters of the project and is a good application,” said Vacca.

Truly, it is a clever and cost-effective use of ClarkDietrich’s HDS sections that was made possible thanks to the ingenuity of Panel Systems and ProBuild’s close association with CarkDietrich. For years ClarkDietrich and ProBuild have appreciated the innovative approach that Panel Systems is willing to bring to all project opportunities. The owners can get projects from foundation to roof more quickly and within budget.