West Chester, Ohio - May 20, 2020 - This year marks the fifth consecutive year that ClarkDietrich has been named a Military-Friendly® and/or a Military Spouse Friendly® Employer. Far from generic monikers, these prestigious designations recognize companies that emphasize recruiting and retaining military veterans. ClarkDietrich has long viewed military service as experience to be celebrated and has created a culture that helps veterans and active-duty personnel successfully balance military duties and a civilian career. Jeff Dozier, a maintenance lead in ClarkDietrich’s Warren East manufacturing plant, is a shining example of someone who has thrived in this environment. 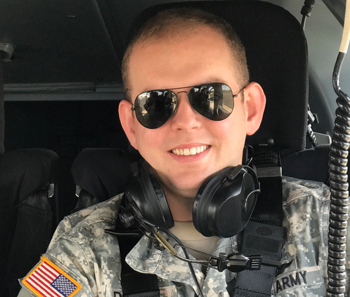 Jeff first dreamed of joining the army as a high school student in Champion Heights, Ohio. Plans changed, however, when his mother was diagnosed with breast cancer during his senior year. Rather than enlist in the army, Jeff decided to attend a nearby college to be close to home and help care for her. While studying pre-med at Kent State University, his mother’s health quickly declined leading him to leave school to support her full-time. After she passed, Jeff decided not to return to college, and instead took a first step towards his dream by joining the Army National Guard in 2014.

Jeff went through basic training and Advanced Individual Training with the National Guard while stationed in Akron, Ohio, where he also worked long shifts at a maintenance job that operated 24/7. Feeling burnt out, Jeff knew he needed more work/life balance. However, he worried his National Guard service would complicate building a successful career, as it required periodic time away from work. He soon found what he was looking for at ClarkDietrich when he was hired onto the maintenance multi-trade team.

According to ClarkDietrich’s President, Jim Collins, a healthy work/life balance is a significant aspect to the company’s corporate philosophy, “The military-friendly climate at ClarkDietrich is an integral part of our company culture as a whole. We have seen tremendous success with our our veteran and active-duty employees. Like Jeff, we have found that military veteran employees bring leadership skills, discipline and a can-do attitude that can’t be beat.”

Two years into his role at ClarkDietrich, Dozier received the call to serve and was deployed for a year, where he served as an E-5 sergeant working as an avionic mechanic fixing helicopters. Even while he was preparing for deployment, his ClarkDietrich family was extremely supportive. “ClarkDietrich is much more than just a military-friendly company, it’s a supportive and understanding family with an open-door policy for servicemen and women,” Jeff said.

In addition to ensuring his positon would be available upon his return from active duty, ClarkDietrich sent Jeff letters and a care package. And, when he returned home, the ClarkDietrich community played a huge role in helping him adjust back to life as a civilian. Jeff described the transition as “seamless”, largely due to the military-friendly climate at ClarkDietrich.

Dozier now serves as a maintenance lead and is responsible for fixing electrical, mechanical and hydraulic equipment—tasks that draw heavily on his experience as a military helicopter mechanic.

Jeff says the army prepared him for success in the workplace in countless ways. One of the biggest takeaways from the army was the ability to troubleshoot. He also learned valuable leadership skills from being a sergeant that he applies to his current role. “I enjoy my role as a leadman because it is similar to being a coach—encouraging my team to problem solve, but being accessible for questions and support,” he said.

His acumen and ability to learn quickly hasn’t gone unnoticed either. “Even though he is relatively young, Jeff has excelled in leadership roles because he is mature, calm under pressure and grabs responsibility in an exceptional way,” said plant manager, Scott Youngs.

Jeff plans to re-enroll in college in fall 2020 to earn his Bachelor’s degree in business with a focus on management. While he enjoys the maintenance aspect of the job, his ultimate goal is to work his way up to a managerial position at ClarkDietrich. In Jeff’s words, he loves this company, the people and the atmosphere—he’s in it for the long haul.