Just outside the city limits of Houston, Texas, William P. Hobby Airport originated as the city’s first and only commercial airport. This title held strong until 1969 when the George Bush Intercontinental Airport opened its doors to the Houston public. Hobby Airport then became the secondary airport for local air travel in the region. In 2013, Southwest Airlines took the opportunity to build their hub at Hobby Airport and make it a focal point to grow flights in this region. Wanting to expand their international flight offerings to the Caribbean and South America, Southwest Airlines called upon construction firm Hensel Phelps to develop an expansion plan for their international terminal. This included five new terminal gates – four of which are used by Southwest Airlines for international flights – along with the construction of a new parking garage to accommodate the heavier traffic flow. Hensel Phelps assembled a large group of unique subcontractors to complete the expansion. Texas Exterior Systems (TES) was among those selected. 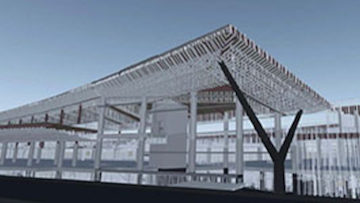 TES Taps The Right Support
TES was contracted to do all cold-formed steel stud framing on the interior and exterior of the terminal expansion. They faced several challenges including short construction deadlines, complex framing designs, and the completion of interior, exterior and roof framing for a building with a gross area topping 177,000 square feet.

To ensure the work was done efficiently and with expertise, TES tapped ClarkDietrich Engineering Services, a team they have opted to work with on several occasions. They knew ClarkDietrich could help address these issues through BIM modeling and coordination, panel drawings, and detailed interior and exterior shop drawings including reference plans, section cuts, and framing details for all interior load bearing and exterior framing conditions. ClarkDietrich also provided all cold-formed steel framing products for the project.

Complex Challenges No Match for Expert Engineering
The architectural design of the terminal expansion encompassed some complex engineering challenges. The project included a large radius roof wing with a detailed fascia and soffit that was engineered and constructed primarily out of cold-formed framing. There was an exterior load-bearing vestibule that required shear walls with x bracing and shear post design. Interior portions of the project required load-bearing design with engineering ceiling joists, girders and posts to provide a rigid roof structure with adequate capacities to support various quantities of mechanical equipment.

To help reduce construction time, the ClarkDietrich BIM team produced detailed panel drawings for all exterior curtainwall framing that was represented in the engineered shop drawings. Panelizing the framing into ten-foot segments allowed crews to construct the panels on the ground and erect them into the appropriate locations. Each panel drawing included a material schedule as well as a detailed layout of the exact dimensions to accurately assemble the panels before construction. ClarkDietrich’s proprietary RedHeader Rough Opening System was also used at all the typical opening locations. This system, which uses one-piece headers and jambs that are easy to install and adjust, reduced labor and material by not having to assemble built-up members for most opening framing.

In order to complete the framing for such a large project in an accurate and timely manner, the BIM team coordinated and modeled every stud and track required to frame all the interior and exterior partitions and soffits.

Proper coordination with other trades as well as creating panel drawings with represented partition MEP penetrations enabled TES to layout and frame large sections of interior framing prior to any MEP being installed. Being accurate and on time with the panel drawings afforded TES the luxury of framing without interference from any other trades while also eliminating any need for rework in the field. Likewise, the trade could use the ClarkDietrich drawings to help guide their own work as well.

A Job Well Done
“I was really impressed with the modeling and proactive nature of the team. They worked through every issue with a high level of detail. Their contributions were highly valued,” said Roy Pinch, VDC engineer with Hensel Phelps.

The combination of hard work and coordination between the engineering team and the BIM team at ClarkDietrich allowed this project to be a successful reality. Construction of the William P. Hobby Airport international terminal was completed on Oct. 15, 2015, which brought international air service back to the airport for the first time since 1969 and transformed it into Southwest Airlines’ international hub for South American and Caribbean travel.