October 11, 2021 - West Chester, Ohio - When regional controller Michael Cerni interviewed for his first position with ClarkDietrich more than seven years ago, it was his military experience that set him apart from other candidates. An Air Force veteran who logged more than 2,400 flight hours and 1,600 combat flight hours during several tours to the Middle East, Cerni had spent years honing skills that would serve him well in his civilian career. 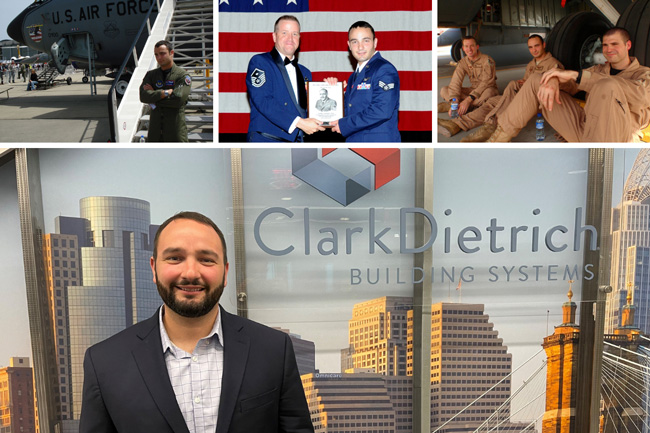 Like other veterans, Cerni credits his military service to his ability to rapidly change course and find creative solutions to business challenges.

Cerni is one of many veterans who have achieved professional success with ClarkDietrich following military service and is an example of the company’s longstanding commitment to veterans and their families. It is because of this philosophy that the company has been named a Military Friendly Employer for the sixth consecutive year.

Cerni said he was initially attracted to working at ClarkDietrich because he felt the company culture was more akin to a small business in the way it treats and interacts with employees. As he has moved up within the company, he said he and his family have always felt supported.

“ClarkDietrich has been very good to my wife and I as we moved around the country for work. At every location, my coworkers and their families have been more than welcoming to us,” Cerni said. “As part of the relocation packages, my wife has even received help with resume building and interview coaching.”

“The benefits veterans and their families bring to the workforce is evident in our offices and manufacturing facilities throughout the country,” said Jim Collins, president and CEO, ClarkDietrich. “The military-friendly environment at ClarkDietrich is a big part of who we are as a company, and moreover, being a military-friendly employer is just good business.”

Institutions earning the Military Friendly Employer designation were evaluated using both public data sources and survey responses. Over a thousand companies participated in the 2022 Military Friendly survey. Since 2003, these lists have set the standard for organizations to provide the best opportunities for veterans and their spouses.

“Companies earning the Military Friendly Employers designation create and elevate the standard for military programs across the globe, they have invested in substantive programs to recruit, retain and advance the veterans and service members within their organizations,” said Kayla Lopez, Director of Military Partnerships, Military Friendly.

The military Friendly Employer list is compiled by VIQTORY, publisher of G.I. Jobs and Military Spouse magazines, and considers the policies, processes, resources and investments that have the greatest impact on career opportunity and advancement for veterans and their families.

ClarkDietrich will be showcased along with other 2022 Military Friendly Employers in the December issue of G.I. Jobs magazine and on MilitaryFriendly.com.