ClarkDietrich is proud to honor this year’s recipient of the Foundation Award, Bob Myers, for his endless dedication to the company and its employees. The Foundation Award is the company’s highest honor and recognizes people who truly exemplify the company values and make the workplace a better experience for all. Bob is an amazing team member and so much more. 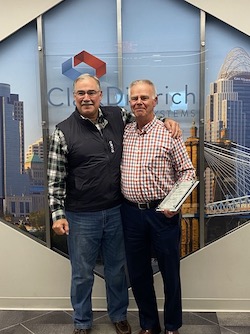 Bob has been part of the ClarkDietrich team for over 48 years, starting on the floor of our Hicksville, Ohio facility with Dietrich. While there he helped train many industry leaders both inside and outside our company. Bob has been promoted through multiple roles over the years, including helping facilitate the merger of national account teams following the joint venture in 2011. He currently serves as a National Account Manager.

Bob has continuously proven his dedication and passion for the ClarkDietrich organization, even going so far as to write his own mother up for an operational violation while he was her supervisor. (Don’t worry—we hear she has since forgiven him!)

Throughout his tenure, Bob has mentored and modeled the way for those around him with his work ethic and positivity. His ability to endear himself to those around him has made him a friend to many in the organization. Co-workers are always glad when he gets on a conference call or virtual meeting. He always greats the group with a “and how is everyone doing today?” He genuinely cares about the people he works with, and it shows in his interactions with others. Bob is the embodiment of our company values and has shown us what a difference that can make.

This is just a small representation of how amazing Bob Myers is as an employee, as a teammate and as a person. Thank you, we have been so lucky to have you as part of our organization for nearly five decades!