For years, Aundra Oliver strung together temporary jobs while his wife Harriette was enlisted in the U.S. Air Force, and often wasn’t able to find work at all due to the couple’s frequent relocations. It was a sacrifice common among military spouses, and a necessary one to support Harriette’s service. 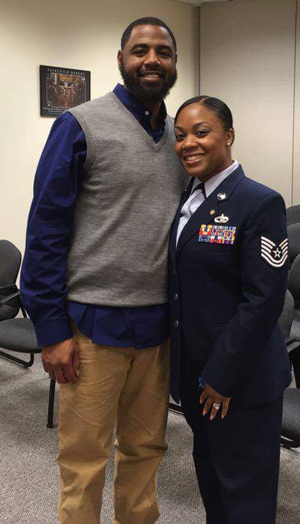 But when Harriette retired from the military a few years ago and it was Aundra’s turn to secure steady employment to support their family of four, he found that the gaps in his resume made it difficult to get a foot in the door at many companies. Recent data shows that active duty military spouses face a 24% unemployment rate—roughly six times the national average.

Luckily, a friend was able to connect Aundra with the manager of ClarkDietrich’s McDonough, Georgia, facility, where he was hired to work in the shipping department. He held that position for about year and a half while finishing his online degree from Ashford University. After completing his degree, Aundra moved into his current role as Virtual Construction Design (VDC) Technician with ClarkDietrich Engineering Services.

“I had been out of the workforce at least eight or nine years, but that wasn’t an issue at ClarkDietrich,” he said. “That was one thing I was nervous about, but they gave me a chance and I excelled at it.”

The Military Friendly methodology considers the policies, processes, resources and investments that have the greatest impact on career opportunity and advancement for military spouses. It identifies the employers that demonstrably provide the greatest career potential. The Military Spouse Friendly Employers survey takes a detailed look at the lifecycle of military spouse employees: What employers do to attract, hire, and develop them; as well as the policies and practices with which employers support them along the way.

“We know that service members and their families have the grit, discipline and work ethic to succeed in whatever they set their mind to. Sometimes they just need someone to see past a gap in employment or lack of on-the-job experience to give them a chance to excel,” said Jim Collins, CEO, ClarkDietrich. “We’re dedicated to providing these types of opportunities at ClarkDietrich and are humbled to once again be named a Military Spouse Friendly Employer.”

The 2020 Military Spouse Friendly Employers list will be published in the January issue of Military Spouse magazine. The list can also be found at www.militaryfriendly.com/Spouse