Longtime ClarkDietrich employee Chris Hauer, regional controller, recently returned from a year and a half sabbatical during which he devoted himself fully to his mission work in Hamilton, Ohio, a city just 20 minutes away from the corporate office. Specifically, it was a desire to mentor and connect with kids that inspired him to start Revolution Bike Ministry (RBM), a program through which at-risk kids learn the value of hard work, friendship and community by helping to rebuild bikes. 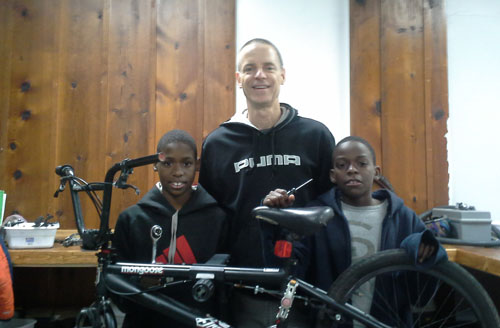 “It’s gone very well,” Chris said of the endeavor. “It’s very challenging, but it’s worthwhile. RBM has done exactly what I wanted it to do, which is develop relationships with kids. Our motto is: building relationships, rebuilding bicycles.  My emphasis is clearly on connecting with kids and using bicycles as the instrument to do just that.”

Six years ago, Chris and his family took a major leap of faith in relocating from their suburban home in West Chester, Ohio to Hamilton to be closer to those they were serving through their mission work. It was an eye-opening experience that revealed to Chris some of the real needs of the community. One area in particular he felt he could make a difference in was a lack of mentoring and guidance for the area’s youth.

“A lot of times kids in low-income families don’t have a father figure in their lives,” Chris notes. “That’s how I came up with the concept of doing the bike ministry as a way to start developing relationships with these kids.”

So, in 2016, in a donated garage space just down the street from his home, Chris launched Revolution Bike Ministry. On any given day, a group of children, mostly boys, come to the shop to help repair donated bikes. For their effort, they are awarded “points,” which can be used to purchase one of the bikes, bike accessories, or snacks. Every 30 minutes of work earns them a point. It takes five points to buy a bike.

“There is a saying:  values are caught, they are not taught.  So, what is modeled in front of children is likely to have an impact on those children,” Chris said.  “I get the opportunity to teach children the value and dignity of working for something.  I can model not only hard work but also what it means to be respectful to one another.  RBM has 3 simple rules:  BE RESPONSIBLE, DO YOUR BEST, HAVE FUN.”

Chris estimates the group has repaired more than 100 bikes, but he doesn’t keep track as that is not the focus of the ministry. The ones not purchased by the kids are sold at a steep discount to residents at a local homeless shelter to provide transportation to and from work or group meetings.

In addition to working on bikes, Chris uses his time with the kids to help with homework, offer advice, or to just hang out and listen to what’s going on in their lives.  Saturday afternoons you will find Chris taking a bike ride with the kids on the bike path in Hamilton.

“There’s so many moments that you have an opportunity to speak truth into their lives. You get that opportunity by walking beside them and doing things together,” he adds.

What an incredibly awesome

What an incredibly awesome and selfless thing to do! Bravo!

This man is a living,

This man is a living, breathing, Superhero, that Marvel or DC Comics would be proud to call their own.

What am amazing thing to do by an amazingly great person. It’s a special thing to hear your calling and be able to fulfill it. Great job, Chris.