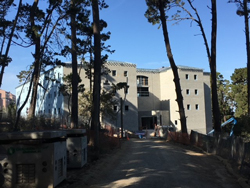 The AIT Barracks facility in Monterey, CA is a $56 million, 110,000 square foot structure used to house up to 320 Defense Language Institute students.  The facility was commissioned by the U.S. Army Corps of Engineers to serve as a modernized, private-sector residence and replace outdated facilities at Presidio of Monterey.  In addition to modern amenities, the structure also boasts many sustainability features such as solar panels, rainwater collectors and highly efficient HVAC systems.

What makes this structure unique are the numerous lateral and vertical design considerations in addition to a massive coordination effort between trades through BIM and panelization. ClarkDietrich served as both the specialty cold-formed engineer as well as the project Engineer of Record.  McClure Engineering was responsible for the foundation and slab design as well as the masonry wall framing. Numerous other designers were involved with the coordination of HVAC, electrical and plumbing systems throughout the building.  ClarkDietrich was also contracted to provide a full BIM model for both structural and non-structural framing at a detail level of 350, in addition to panel drawings for the structural walls.  Joist framing was also coordinated and prefabricated on site by the installer.

The structure is located in a high seismic region which required a large number of shear walls and holdowns. To resist seismic loading, sheet steel was used to provide overall stability to a majority of the structure with the exception of the masonry wall along the access road.  Proprietary shear wall posts were connected with prefabricated holdowns between floors. At the foundation, tension loads on the shear wall posts exceeded the capacity of post-installed concrete anchors, requiring structural steel plates which were precast into the foundation.  These structural steel plates were designed by McClure Engineering to resist the seismic tension forces at the shear wall posts.  Small structural plates were welded to each shear wall post and then down to the embed plates, allowing for field adjustment.  ClarkDietrich also provided layout drawings which depicted the exact location of nearly 300 shear wall post embed plates to within 1/8” utilizing the BIM model.  During installation of the first floor panels, it was discovered that only one of the precast embed plates was installed out of tolerance, resulting in a proper alignment rate of over 99.5%.

In addition to panelization of the wall and joist framing another creative solution used to speed the pace of construction was a ledger construction technique.  Bearing wall studs were stacked directly on top of each other with joists and rafters framing into the sides of the wall.  This allowed for metal decking to be installed at each floor level without the need for the gypcrete floors to be fully installed.  In addition, deep leg tracks were used at the base of the second, third and fourth floor walls in order to double as not only the base track, but also as a pour stop for the gypcrete topping.  Construction delays were further prevented due to the fact that wall and joist installation was not dependent upon completion of the floor framing.

In summary, the AIT Barracks project is a four story, load bearing, cold-formed steel structure that required a number of outside the box solutions to keep the project on time and on budget.  From high seismic loading, antiterrorism requirements and a mix of cold-formed steel, masonry and structural steel, this project encompassed several very difficult design challenges.