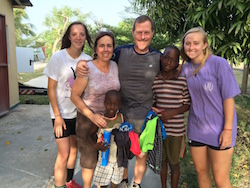 Soccer Beyond Borders, a spiritual outreach organization, was founded 18 months after the 2010 earthquake that devastated Port-au-Prince, Haiti. The organization came to be after John Keefer and others visited the city on a mission trip. Using soccer as a catalyst for positive change, Keefer saw not only the lives of Haitians change, but the lives within his own family as well.

Here is his story:
The first two years I visited Haiti, I was with a team of mainly young adults. Our goal was to use soccer as a tool to break down language and relational barriers. We were blessed to be able to stay at the New Life 4 Kids Orphanage and Guest House and spend time with the 120 children that live there. We were also able to travel to several smaller orphanages as well.

The initial meetings always started with an awkward time when all stood and stared at one another. Then we would roll out a soccer ball and the ice was broken. Whether at a small house orphanage or a rocky hillside in a tent city in Cite Soliele – the poorest area in the western hemisphere – we were able to make friends, but more importantly serve others with food, water, clothing, hope and yes soccer equipment.  A “balloon” soccer ball was one of the most sought after items during our travels.

It was at the New Life that my family’s life was forever changed. Here our team made many great friends from infants through adults. All had a story about how the earthquake changed their lives.  Some lost limbs, many lost family and friends, and all lost some degree of hope. I met a special young boy named “Louis” or “Guivens” as he went by both.  We played soccer, hung out and got to know one another. Guivens knew how to steal the show with his charming personality. While my daughter wanted to adopt all of the babies and toddlers, I held her at bay. We returned home that first year forever changed, but still as a four-person, one-dog family.

The second year we were greeted at New Life as old friends and our relationships grew stronger. We served there and at other locations in and around Port-au-Prince. The week passed too quickly and our relationships grew stronger. So much so that I felt called to investigate adopting Guivens. I returned and discussed the decision with my wife and two daughters and we decided to begin the process in July 2012. As I write, we continue in the process four years later. Oh, and there was another surprise: Guivens had a younger brother James!  Of course, we are now adopting the two boys.

Since we first set foot in Haiti, we have seen many lives changed including those who live in Haiti and those who have gone and served. The soccer outreach continues to grow and expand, as does our relationship with New Life. It is said that life begins at the end of our comfort zone. I say let life begin.